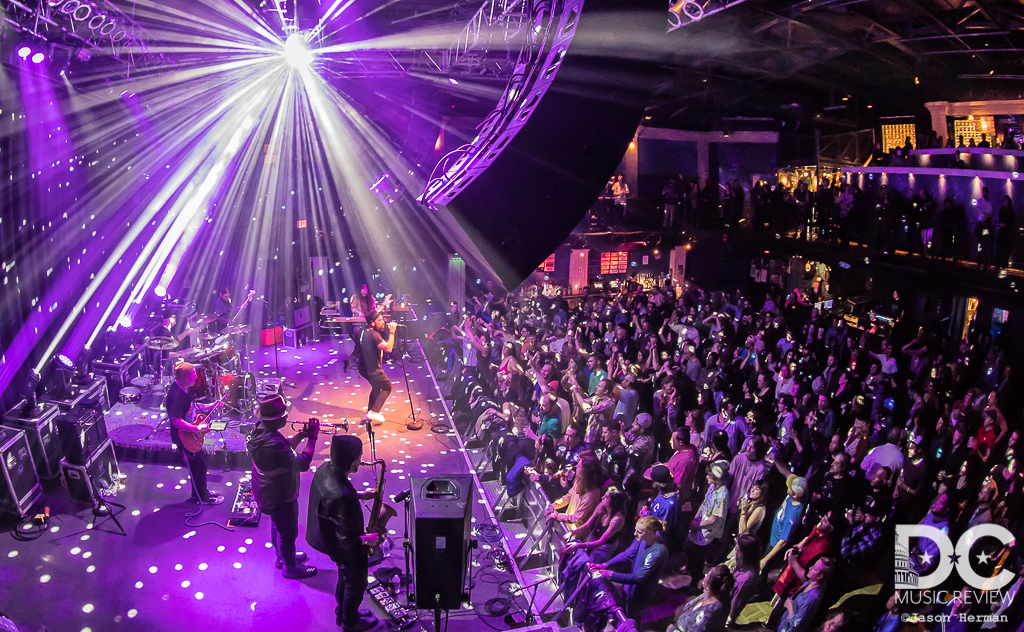 On a night with competing shows all over town, fans who made the choice of getting down at DC’s historic nightclub were not disappointed, as both plans played lively sets that kept the crowd moving and shaking from start to finish.

Chopteeth  was an excellent choice for the opening slot and played a great set of world-inspired funk that surely won over more than a few Motet fans. Their music draws inspiration from all over the world, with lead vocalist/guitarist Michael Shereikis and the rest of the band singing in several different languages throughout the set, but is particularly anchored in Afrobeat and big band jazz, featuring a five-piece horn section and a pair of percussionists. The music’s West African polyrhythms and relentless energy got the crowd warmed up well for a long night of dancing. Drew Sayers of The Motet

When the Motet took the stage, fans were anxious to keep the party going, and the band responded, putting the pedal to the metal immediately with “The Truth.” The Motet horns, made up of trumpet player Parris Flemming and saxophonist Drew Sayers, established themselves right away, along with keyboardist Joey Porter accompanying on the clavinet.

It was immediately apparent that the crowd would feed off the energy of vocalist Lyle Divinsky all night, as the frontman danced around the stage, mic stand in tow at times, encouraging his band mates during their solos. With the exception of a few instrumental numbers where he left the stage, that trend continued throughout the set. Divinsky’s charisma and showmanship set a great tone for the show, and he was aware of it, declaring “We’re starting off real good tonight,” halfway through the opening number.

Slowing things down just a tad with “Back it Up,” this funky R&B tune featured the first standout solo of the night from Porter and an opportunity for the crowd to sing along with the chorus. “Damn!” came next, featuring some call and response, a meaty guitar solo from Ryan Jalbert, and a chorus that would fit right in with James Brown’s catalog. Lyle Divinsky of The Motet

Divinsky left the stage briefly for the psychedelic fusion jazz jam “Cretan.” When he returned for “Keep On,” the band took off with this infectious rocker, highlighted by a talk-box solo by Porter that really energized the crowd, who roared when the effect kicked in.

From that point on, the band had the crowd in the palm of its hand, slowing the tempo with tunes like “Supernova,” “Rynodub,” and “Fool No More,” before eventually reigniting the crowd with “Closed Mouth Don’t Get Fed” and giving drummer/bandleader Dave Watts a solo to close out the set. Returning to the stage for their encore, the Motet ended the night with their newest song, “Get It Right,” taking time to engage the crowd in one last sing-along, and taking a moment to spotlight each member of the band to close out the show. 1 - New song. Will be released in their upcoming album.