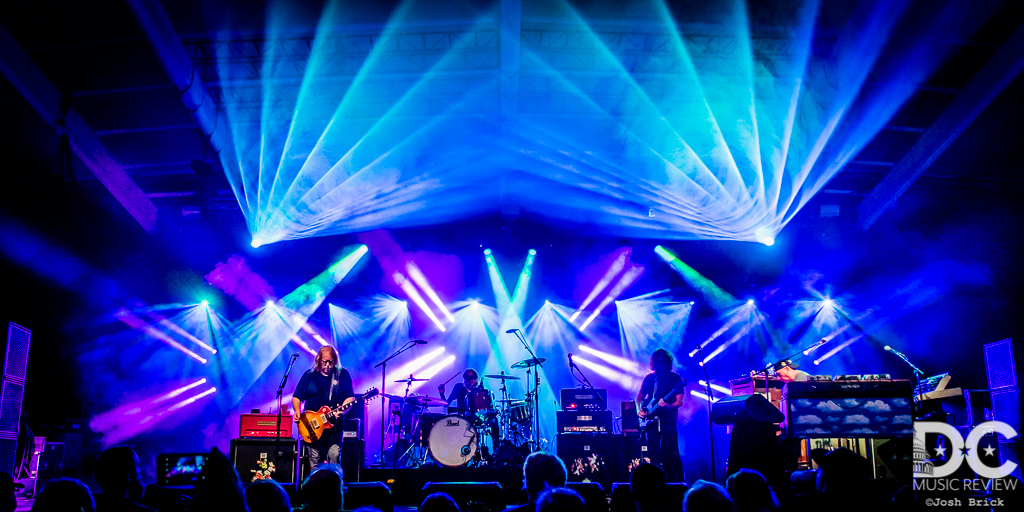 Veteran blues/rock/jam quartet Gov't Mule rewarded die-hard fans in Baltimore on Thursday, July 11 with an epic extended set after a nasty storm struck the region. Heavy rains hit the harbor in Charm City and some lingering lightning forced the band to take the stage after a short delay. Warren Haynes (guitar, vocals) informed the Mule faithful that the band would forego the usual break and play until curfew at MECU Pavilion. Haynes and the boys – Matt Abts (drums), Danny Louis (keyboards, trumpet, guitar, trombone, vocals), and Jorgen Carlsson (bass) – harnessed the storm's energy and played a  continuous two-and-a-half hour set that blessed all in attendance with their Mule fix. The show began with a classic Mule pairing – "Bad Little Doggie" and "Lola Leave Your Light On" – two serious rockers that brought the power that Gov't Mule is known for. Next was "Burning Point" from the band's 2017 release, Revolution Come...Revolution Go. After a ferocious "Brand New Angel," the Mule train kept rolling with a high-energy "Slackjaw Jezebel" and it was clear the band was locked in. Carlsson's bass chugged along with reckless abandon during an impressive solo as the always-tight Abts kept the beat with serious precision. Haynes and his crew are well-known for their impressive execution of choice cover songs and this night was no different. A powerful take on Elton John's "Have Mercy On the Criminal" had the crowd enthralled as Louis tickled it pretty on keys before Warren stepped in on guitar with his beautiful signature tone. Wasting no time, the band went straight into the Etta James classic blues/soul number, "I'd Rather Go Blind" that gave us all the feels. Haynes followed with "Soulshine," his signature tune that brought light and love to the pavilion on a dark night. Entering the territory where the band would have taken a break, Mule pressed on with some old-school songs including a thundering "Thorazine Shuffle" followed by the reggae-infused "Time to Confess" that closed with a ripping guitar solo. The band was in high gear and crowd felt the magic as Warren brought out the slide for an exquisite take on Jeff Beck's "Freeway Jam." After "Bands of the Deep End," and a heavy "Larger Than Life," Haynes asked which dedicated fans joined the Mule train from the very beginning in 1994/1995. He reminisced about playing Bohagers in 1994 before admitting he didn't remember it very well. The band then led us on a 15-minute excursion through the classic, "Blind Man in the Dark" that represented the very best Gov't Mule can offer. The set closed with a stunning rendition of Blind Willie Johnson's "Dark Was the Night, Cold Was the Ground" as Warren utizlied the slide on his 12-string Gibson Les Paul. The song is a perfect vehicle to display the band's combination of sheer power and musicianship that thoroughly rocked everyone to the core. After a quick encore break, the group returned for one last song – "Dreams and Songs" – a Haynes' career memoir of sorts. The tune is classic Warren Haynes in every sense  – heartfelt songwriting mixed with a beautiful melody – that proved the perfect ending to such a special concert. He thanked the crowd for sticking out the weather but it was really the fans who were grateful to Warren and Gov't Mule for leaving it all on stage for us to experience.

Click here to see the setlist for Gov't Mule's performance at MECU Pavilion on July 11, 2019