Interview with Andy Hall of The Infamous Stringdusters

Features
Interviews
By Karin McLaughlin / May 17, 2018 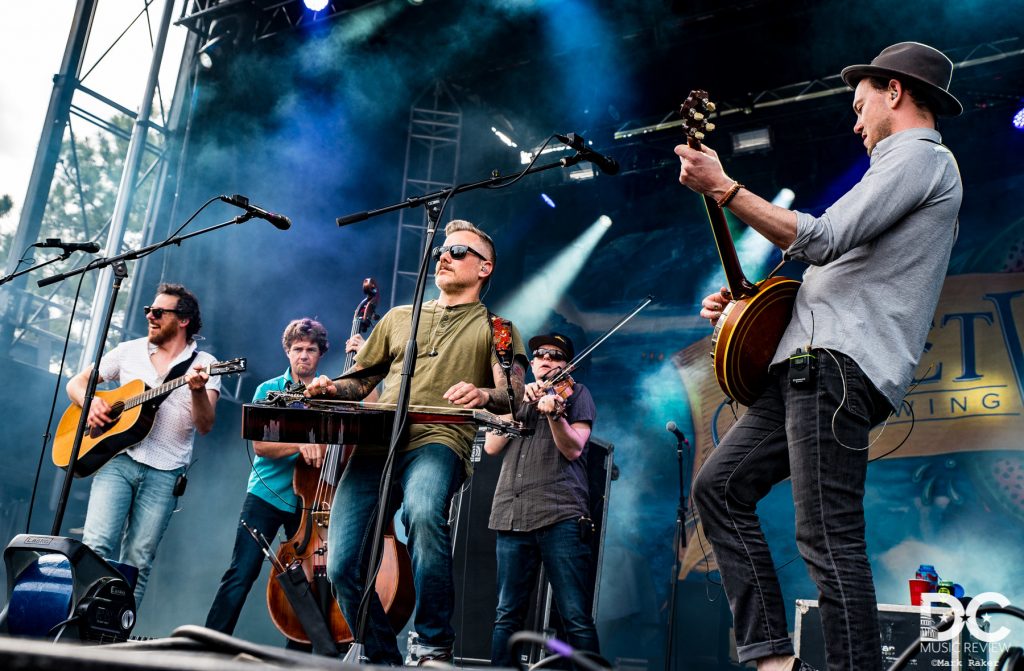 After a blowout performance at Sweetwater 420 Fest, Andy Hall  of The Infamous Stringdusters took some time to answer our questions as they gear up for Delfest on Memorial Day Weekend. Karin McLaughlin: Congratulations on the well-deserved Laws of Gravity Grammy win – how does it feel to have that notch on the belt?

Andy Hall: The Grammy win was an unexpected but awesome surprise. I never go into something like that expecting to win. Even though we've been doing this band for awhile, I still feel like the new guys in situations like that. I'm up there watching people win awards who I've listened to my whole life. Jazz and blues legends etc. Then we get called. It's surreal.
But then you get home and it's back to working on music. I'm sure it helps some with the biz end of things, but it doesn't change much as far as making music. Pretty cool though!

KM: What is it about this album that you think got you the nomination and then the eventual win?

AH: Laws Of Gravity has our best songs to date In my opinion. Of course you always think that with each new release, but being as objective as I can I think that's the case. Also we've been building our band for quite a few years, I think we hit critical mass with this release as far as people being aware of us. It's interesting because this latest album is a little more bluegrass than some of our recent records. I think we'd been shying away from that for awhile artistically, but it's something we do really well. And something we really love, and I think that came though in the recording.

KM: You guys have an amazing stage presence and seem to be able to take anything and run with it together in a flawless way – how has your chemistry of playing all these years together molded into what it is today? AH: I like this question, because it hits at the core of what we are as a band. The idea of using our knowledge of each other musically and personally to dive deeper and deeper into improvisation is a big part of what motivates us. If you have a good bit of musical chops, the depth of a bands improvising as group is almost limitless. Thinking of Phish here. Or maybe fusion jazz bands. As we continue to explore that part of our band it continues to expand. Everything that happens on stage is honest and real and in the moment. I think people resonate with that.

KM: Your FB fan page ‘Got Dusted’ has over 7000 members and counting – what is it like to have a fan family that is so loyal and appreciates the music that you guys put out so much?

AH: That's everything! To me the musical experience isn't complete without someone to hear and appreciate it. The way our fans engage with what we do blows my mind. I'm constantly in awe of those amazing friends/fans. They help give us the inspiration to keep pushing, to keep writing better songs and putting on better shows. All I want is to make them freak out! It really feels like a team effort. I hope they know that. KM: You guys are on a ton of festival lineups this summer – what are you really looking forward to about playing these festivals as opposed to single ballot shows – what do you really like about the festival scene?

AH: Festivals are really where we all became sucked in by this whole music lifestyle. It's where we learned to play, met up with friends, and saw our heroes on the big stage.
I have this image in my mind of walking over a rise on a dirt path through the trees toward the stage, with music playing in the distance and the lights glowing over the from the stage glowing over the hill. That excitement of leaving your campsite and journeying to the stage to see you favorite band. It magical. I don't camp as much at festivals these days, but seeing our fans, and friends in other bands and playing outside in the summer is the best.

KM: Delfest – one of my favorites is coming up Memorial Day Weekend and is, obviously, named for Del McCoury and has been around for years. You guys have moved up that bill over the years considerably – what is it that keeps you guys coming back to be a part of that lineup? The Infamous Stringdusters perform at DelFest

AH: Delfest is cool because it really started with an appreciation for the man, Del. I love that about this fest. It's grown into this amazing mix of bluegrass and many other styles. I guarantee there is no other festival you can see Trey band and Doyle Lawson on the same lineup. Del is king in traditional bluegrass, but he's made a real effort to collaborate with people outside the genre. Our band really relates to that vibe. We love the whole McCoury tribe and are happy to know them and play their fest!

KM: One thing you haven’t done yet that is on the bucket list for 2018 – either a collaboration, cover, solo show or festival, name it.

AH: We've been doing this version of Phishs' Possum. I'd love to get Mike Gordon up to sing it with us!

Be sure to check out The Infamous Stringdusters's tour schedule to see them any one of their upcoming performances including Del Fest.