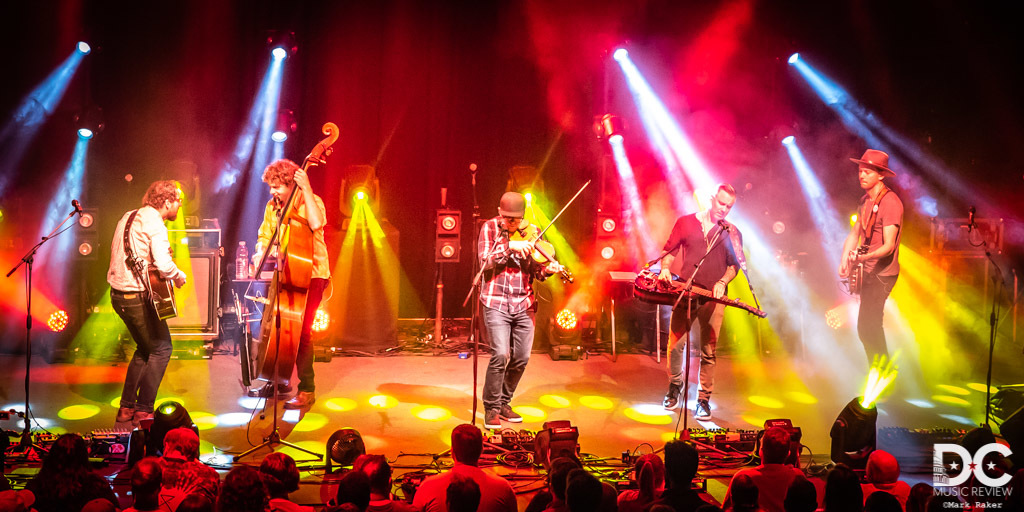 Everyone in attendance Friday night, April 5, for the amazing two set show by The Infamous Stringdusters definitely got dusted good and couldn't have asked for more. The quintet left it all on stage as they celebrated the release of their newest album, Rise Sun, with an incredibly impressive show at 9:30 Club. Opening with the album's title track, the enthusiasm from both the band and fans continued to build with every song and jam in between. As mentioned in  DC Music Review's interview with guitarist Andy Falco earlier in the week, they didn't play the entirety of the album but satisfied the craving to hear the new stuff live well enough.

Incorporating songs from their newest release for about half of both sets, smiling faces and dancing feet were happy to get to share the excitement and fresh sounds of the night. The Stringdusters also added in some of the great songs off the Grammy-winning album, Laws of Gravity, like "This Ol' Building" and "Maxwell".

In typical Dusters fashion, songs led into others with hypnotic and mesmerizing jams seeming to last a lifetime and even band members noted that they were in a "psychedelic bluegrass trance" on stage. Happy to be in the nation's capital on album release day, there were many thanks to DC throughout the show and noted multiple times and that the excitement of being able to share the special day with them was a mutual feeling from the band and the fans in the audience. After a great first set, they seemed to come back even stronger with set two and a cover of Phish's "Possum" that got the crowd bouncing even more than set one where it was thought folks might've maxed out their energy. After finishing out an incredibly energetic set two and thanking the audience yet again, the guys returned to the stage to play a three song encore that included a version of "One Love" by Bob Marley where they were joined by the members of opening band Jon Stickley Trio that was a perfect way to end the night. The feel good song even invoked about two dozen attendees close to the front of the stage to put their arms around each other and sway to the words while singing along with each other and the band.

The Infamous Stringdusters continue their tour with shows all up and down the east coast with festival season fast approaching.  Check the rest of their tour schedule here and make sure that you catch them when you can - their shows are truly something that you can't help smile all the way through. Editor's Note:  The Stringdusters were just announced as one of the returning headliners for the 2019 Strings & Sol Festival in Puerto Morales, Mexico this December.  Check here for more information on this great fest.