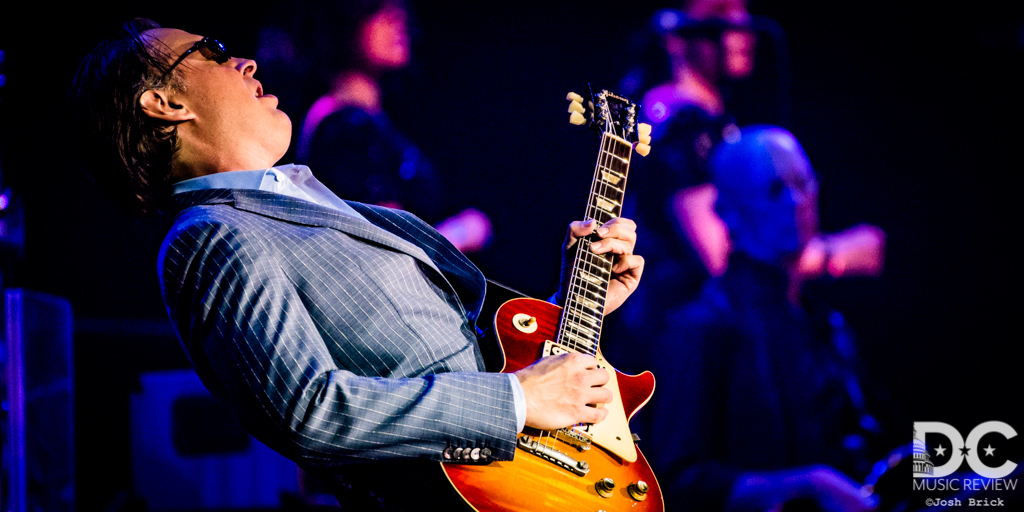 Blues-rock titan Joe Bonamassa didn't know if he was in DC, Virginia or Maryland when he performed at The Theater at MGM National Harbor on Saturday, November 9. He admitted to playing the "wrong fucking song" to the sold-out audience and apologized for losing his head for a few minutes. No apology was necessary. The guitar virtuoso let it all hang out for two hours, unveiling a rarely-seen display of guitar mastery that left fans in awe time after time. Touring in support of his 2018 release, Redemption, Bonamassa began with a trio of high-energy tunes from the album - "Evil Mama," "Just Cause You Can" and "King Bee Shake Down" - and the show was on. Joe was fiery early, working the fretboard on his '59 Gibson Les Paul with ease; one of many of the rare and vintage guitars that would make an appearance on Saturday night. Joe continued with a couple of tunes from his 2016 release, Blues of Desperation, including "This Train" that featured a Jethro Tull "Locomotive Breath" piano intro by Wynans as well as album's title track before digging deeper in his expansive catalog. "Sloe Gin," a Tim Curry cover, has been one of Joe's show stopping tracks for years and its live rendition has evolved and matured throughout his career. As Wynans delivered the opening notes on keys, a substantial applause trickled throughout the theatre. Augmented by amazing vocal harmonies from MacRae and Latukefu, the song slowly burned on as Joe lamented "I feel like I'm gonna die" before launching into the jaw-dropping guitar solo on his vintage Gibson Les Paul. Bonamassa coaxed sounds from his axe that would make any guitar player jealous, ripe with stunning tone, vibrato and phrasing. The show rolled on with other notable highlights including a spectacular rendition of B.B. King's "Nobody Loves Me But My Mother" and a rollicking "Ballad of John Henry" that got the entire crowd on their feet for the remainder of the show. After a short encore break, Bonamassa returned to the stage solo with his acoustic in hand and delivered a dizzying demonstration of "Woke Up Dreaming" that had the crowd hooting and hollering. The band joined Joe for the final tune of evening, "Mountain Time," from his 2002 album, So It's Like That, and sent his fans - new and old - home with assurance that blues rock is in good hands with Bonamassa - one of the best guitarists in the world.

Joe and his band continue their fall tour tomorrow with a trio of shows in New York City at The Beacon Theatre before heading south to close out the run. We look forward to his DC-area return!

Click here to see the setlist for Joe Bonamassa's performance at The Theater at MGM National Harbor on Saturday, November 9, 2019.

Evil Mama
Just Cause You Can
King Bee Shake Down
Self Inflicted Wounds
This Train
Blues of Desperation
Sloe Gin (Tim Curry Cover)
Well Well
Nobody Loves Me But My Mother (B.B. King cover)
Little Girl
Ballad of John Henry