Billy Strings Greeted As Music Royalty At The 9:30 Cub 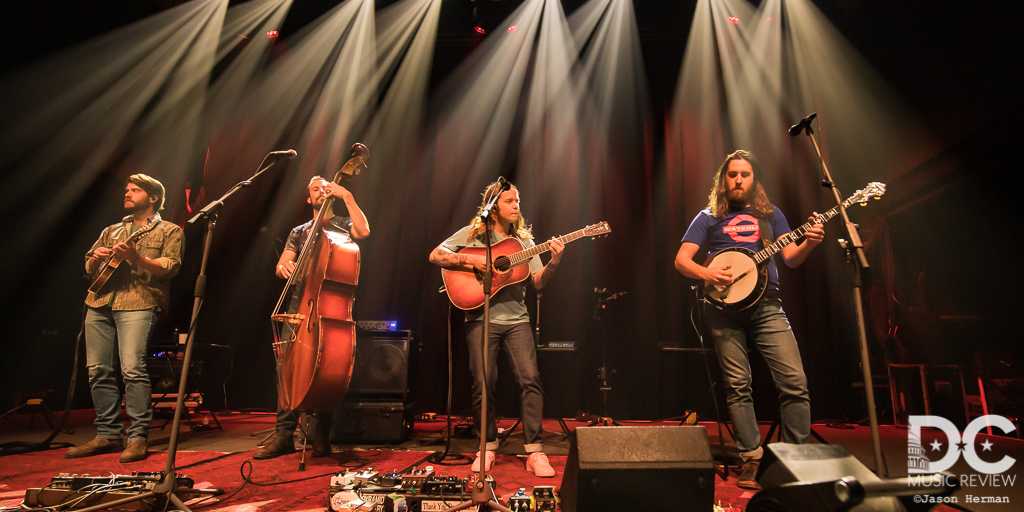 ​It's absolutely no surprise that the International Bluegrass Music Association's winner of the guitar player of the year award, would bring a crowd to Washington, DC, just as he has been doing with consistently sold out shows since the start of the Home tour.  ​The love that fans have for him in the Nations Capital was evident with the around the block line waiting to get in to see the musician do what he does best - hypnotize the crowd with incredible picking skills that are unlike any other. Over the years, Billy has come to our area many a time.  A regular both at Delfest and a frequent opening act for Greensky Bluegrass when they come to town during their usual winter tour stop, the love runs deep for Strings and his music.  Saturday night he once again sealed the deal for bluegrass fans that jumped at the chance to get a ticket to be infected by the energy that he seems to never run out of on stage.  Year after year, you can see Billy perform 200 shows or more and each one he brings the A game and A squad with his touring band that consists  of Billy Failing (banjo), Royal Masat (upright bass) and Jarrod Walker (mandolin) who have proved to be the all-star team that Billy needs ​by his side.

As soon as he took the stage, the crowd was all in and ready for whatever was thrown their way.  The most impressive part of the show was not only Billy's ability to flip his hair around in circles while still picking his guitar at the speed of light, but the new bells and whistles that seem to have been recently added to all of the band members pedal boards.  Knowing their crowd, the trippy effects made for some incredible new sounds that were much more than you would normally get at a bluegrass show and were thoroughly enjoyed by ALL.

Always a known fan of the Grateful Dead, the band put an extra smile on faces in the crowd with a fiery version of "Deal" as well as what I personally had high hopes that we would get to hear but was only teased during "Pyramid Country" with "Shakedown Street".  In all honesty, I'm not entirely sure that the 9:30 Club would have been able to survive the overflow of happy hippy hearts had he actually played the song in its entirety, but I for one will be waiting until the day that I hear it played by him live so that I can dance until my feet fall off. Excited to hear sounds off the newest album that was released back in September, he also included music from ​past albums like a true fan favorite "While I'm Waiting Here" from his 2017 album Turmoil and Tinfoil.  ​Being that even when there isn't a new album with new material, the band seems to always give us something new, fresh and exciting - be it just the foursome or via collaborations, it's an extra treat getting to hear them playnew songs like "Running" and "Must Be Seven" which only reiterated why he is selling out date after date on this tour.

​Showing that Billy is one of those artists that you never get sick of seeing live, I saw fans who I had previously met at almost every other festival ​I saw Billy this summer - Delfest, Blue Ox and even last weeks Jeff Austin tribute What the Night Brings out in Denver.  Fans, including myself, follow him far and wide and he acknowledges and appreciates that, showing us just as much love as we show him.

Having no opener, Billy delivered two sets of ​incredible music and ended the second set with a mind-blowing collaboration in true jamgrass fashion lasting damn near fifteen minutes and showcasing the phenomenal skills of each member of the band.  Once th​at was over and the fellas came up for air and unplugged, despite having given it their all, the crowd wanted more.  A very short break from the stage was taken and then they were demanded ​​right back with immediate roars.  They returned for what Billy promised to be a 'shit kicker' of an encore.  He delivered on that promise, without a doubt by covering one of the most recognized songs in Motown music with Tina Turners' "Proud Mary".  There wasn't a single person who wasn't absolutely thrilled with the choice and sang along with every word.

The band left the stage on fire and after the house lights came on, I got to witness something I never before have at a 9:30 Club show.  Whoever was in charge of the song that came on the speakers next, "U.S. Blues" by the Grateful Dead, I salute you sir, well played.  ​Concert goers didn't go anywhere but instead, shared with each other once last celebration of great music, dancing their way out the doors into the cold November night.  And they couldn't have been hippier about it, pun intended. Click here to see the setlist for Billy Strings' performance at The 9:30 Club on November 10, 2019

1. Sunnyside of the Mountain

8. Don't Let Your Deal Go Down

3.  Billy Strings told the audience before the song that he promised to "take you all home with a real shit kicker here" Click to see the entire nugs.net catalog for Billy Strings