Lettuce Turnip the Beet at The Anthem 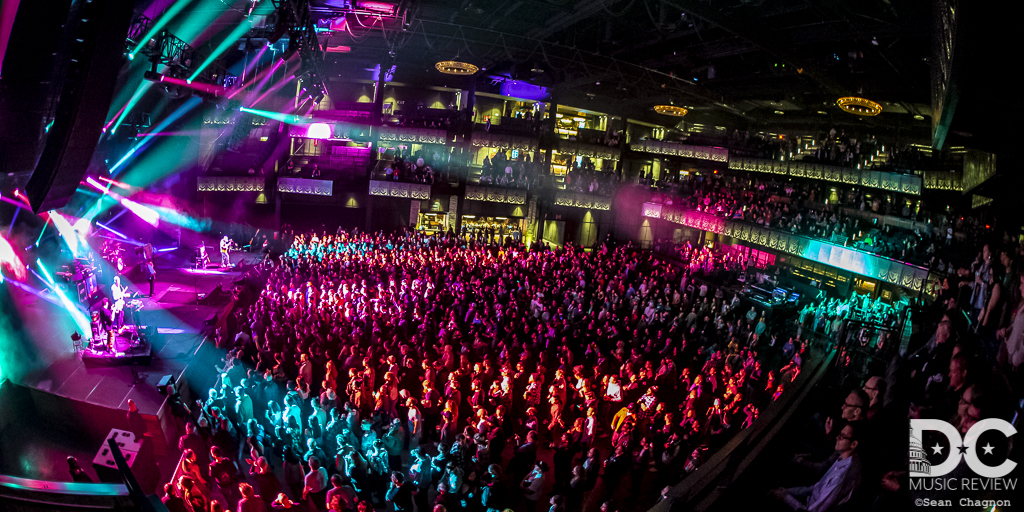 With two strong opening bands that both match the funk and energy of the main act, attendees knew that they were in for a night of fun! Ghost Note, a percussion-based funk, hip hop and jazz group from Dallas, Texas opened up the evening with their strong rhythms, crowd-loving moves and conga drums that the DC crowd definitely supported to the fullest. Next on the stage was Antibalas who has enough members in the band to field a baseball team and each one unique in their own style and music ability. Together onstage the members, almost too many to list, commanded the stage and lead the audience on a journey through all kinds of music. The stage presence and outfits of the band members alone were a force to be reckoned with and the music only added fuel to the fire of fun. After a short break and much anticipation, the headlining act finally took the stage with “Krewe” the song that also got a nod with the Lettuce documentary that has given fans of the band an insiders look at members and the band as a whole. Drummer Adam Deitch kept the beat strong as fans got ready to watch the stage get real funked up and though for the majority of the first few song, bass guitar player Eric Coomes stayed in the shadows of the stage, his presence was more than felt. After finally emerging into the lights that The Anthem has become known to amaze thousands with, he strutted back and forth with the ownership his performance commands still safe from the lights with his amazing pair of sunglasses that never came off, per usual. Lettuce has always been a group that can lay the funk on thick and that makes music fans from the District big fans. Incorporating the sound of Go-Go in a good amount of their music, they also are fans and friends of a variety of members of the music community that was birthed in our city.

​Having performed several times in DC before, Lettuce never lets the opportunity to honor the Go-Go sound when they come to town.  Playing at The Anthem back in 2018, the band invited Tyrone "Jungle Boogie" Williams of Rare Essence and Big Tony of Trouble Funk to come out and play and 2019 offered up something equally as epic.  Members were joined onstage by local music legend Milton "Go Go Mickey" Freeman, formerly of Rare Essence, for several songs where musical interludes that lasted minutes on the congas made audience members cup of funk runneth over.  ​

​Continuing on through a set list that amazed and wowed the crowd, The Anthem filled with more and more energy as the music pressed on.  "RVA Dance" "Rock Creek Park" and "Straighten it Out" seem to be songs hand picked in order to get the crowd as excited as possible and as heads bobbed in the beautifully colored lights that shone done, it seemed to be just right.

Half-way through the set, the band also let loose with a cover that is nothing less than pure magic mixed with nostalgia and a dash of inspiration.  The way that they play their unique cover of Tears for Fears "Everybody Wants to Rule The World", it's easy to see why they are nominated for Best Contemporary Instrumental Album of the year.  Not a single member of the audience wasn't singing along convinced that if it was us against the world, we might just have a take over that would make it a better place to be.

Always a pleasure and mesmerizing to watch, Lettuce at The Anthem once again did NOT disappoint and showing so much love for the music and sound that our city holds near and dear ensures that the boys will always be welcome in the Nations Capital!

There are no words! We are beyond honored to be nominated in the category for Best Contemporary Instrumental Album! Thank you @RecordingAcad

AND congrats to all of the other nominees! pic.twitter.com/1ONlnjJO1V