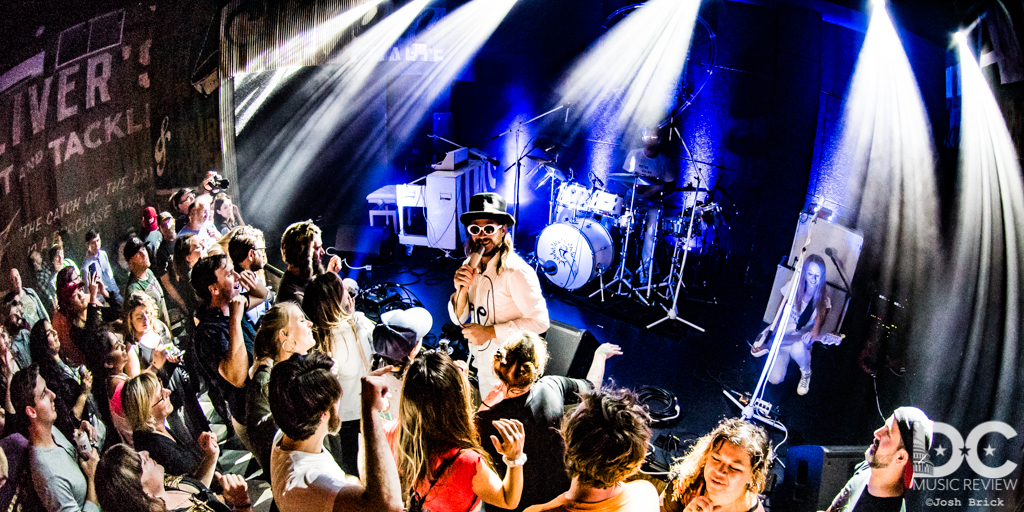 For several weeks, fans of Marco Benevento eagerly awaited his performance on October 26th at Pearl Street Warehouse in Washington, DC. Fans were particularly excited that this performance marked the official album release party for Benevento's latest album, Let It Slide, which released on October 20th. Mattson 2 opened the evening's dance party extravaganza. The duo provided a thick, velvety sound that resonated through the venue with the music much more extensive than a two-piece band out of San Diego, California. The luscious and subtle reverb of the guitar of Jared Mattson was complemented by the fantastic drumming of his twin brother Jonathan Mattson. The drummer made sure to provide a bass-fill to the music by utilizing an ever-present kick drum that complimented the texture of symbols combined with creative drum work. The underlying middle eastern influenced and ethereal sound by Mattson 2 got the audience moving to a blissful groove that further prepared concertgoers for a night of energetic dancing. Before taking the stage, one could not help but notice Benevento's distinctive piano. The piano looked more like a mad scientist's playground than a traditional piano with effect pedals neatly lined up and a giant piece of equipment with knobs, dials, and patch chords. It is Benevento's piano configuration that highlights Benevento's reputation as one of the pure musical geniuses of the experimental music scene. Benevento wears his distinctive mad hatter's top hat and a bold white glasses when performing live and assumes the role of a modern-day Leon Russell - an incredibly gifted artist with no contemporary equal in his genre. At 9:30 PM, Benevento hit the stage along with bassist Karina Rykman and drummer Dave Butler ready to perform a two-hour nonstop experimental jazz dance-party. Bulter and Rykman were dressed in white with t-shirts that read "We're using time for fun." No t-shirt in the house that night could accurately sum up what the next two hours would be - musical fun!

This performance contained the musical genius of three incredibly talented artists that musically intertwined and complimenting one another. The drumming talents of Dave "DB" Butler (who for an evening became "DB-DC") complemented and sustained the evening's performance. Rykman would use her bass pedals to become the "Fuzz Queen of DC" for the night. Benevento and Rykman, in particular, were having fun on stage together. The two artists were perfectly in sync with one another, not only musically but rhythmically with body language. These two would bob their heads and shoulder together, and exchanged smiles and winks hidden in the shadows of the light system but apparent to all who looked on.

There were actually two keyboardists that evening - Benevento and his lighting director (LD). We watched as Benenvento's LD controlled Pearl Street's lighting system and brought to life like no other performance we have witnessed at this venue before. Throughout the evening, lights danced upon the brim of Benevento's hat, lit the powerful shape of Butler, and frolicked on Rykman's golden hair. The soothing and energetic coronas of magenta, blue, yellow, and green were not just reserved for the stage but also illuminated the dancing crowd. The performance was a pure musical genius, filling the venue with music that was simultaneously whimsical, danceable, and ethereal. At one point, Rykman was so moved by one of Benevento's rhythmic groove she was seen backed up against the wall in amazement with a full face grin as she "air pianoed" to the sounds coming out of Benevento's piano until she rushed towards Marco with an enthusiastic smile to meet him and emphatically finish the song

Throughout the performance, the truest magic appeared in the moments that Benevento would bring his right hand up to the synthesizer, and even more so, is when he puts his left hand to the dials on his magical machine and bent the notes produced by his right hand. Later in the evening, a hushed moment drew over the crowd as Benevento - without an equal - performed with his closets counterpart - his shadow. During an intricate piano solo, Benevento was accompanied only by his shadow, which appeared on the wall behind him. The two Marcos delicately played until this musical bliss segued into a rhythmic musical assault as the remaining band members joined in. Benevento and his shadow would delicately retreat weave back and forth in the song - delicately retreating and magically reappearing once again.

Throughout the evening, Benevento would step off stage to dance and sing amongst the crowd, including a sincere moment as Benevento spotted a cousin in the audience, and they sang together while sharing a genuine family embrace. The evening's performance and dance party, culminated in a passionate version of INXS' "Need You Tonight." The performers version of this song was an unforgettable experience and breathed life back into Michael Hutchence's spirit.

The performance was an incredible blend of songs from Benevento's catalog blending new and old songs alike with a particular celebration of Let It Slide. If you have not seen Marco Benevento perform live, please take this opportunity to see him perform live from now until February 2020. We sincerely look forward to seeing these talented artists perform once again in the DMV.

Click here to see the setlist for Marco Benevento's performance at Pearl Street Warehouse  on October 26, 2019

5. The Story of Fred Short