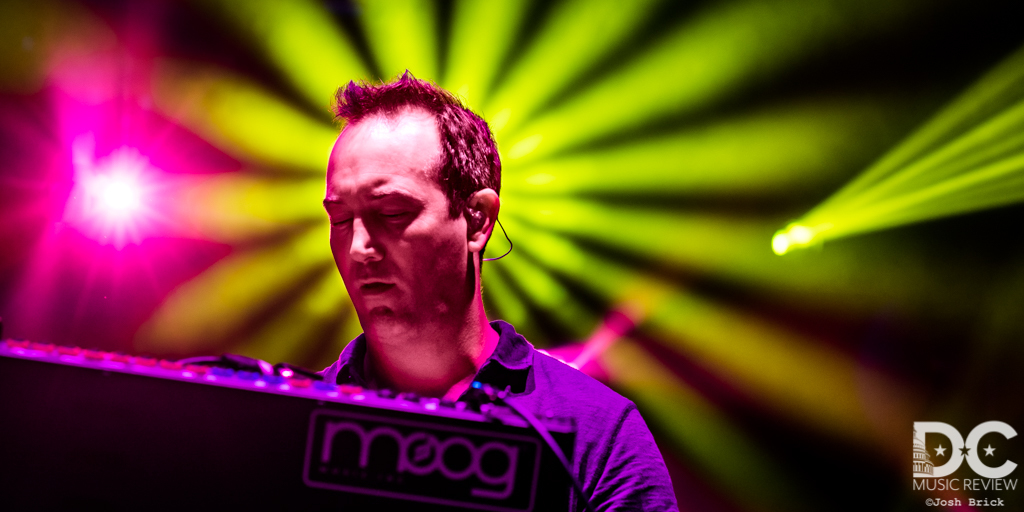 Keyboardist Joel Cummins, a founding member of the progressive-rock jam band Umphrey's McGee, has been touring with the band for more than 20 years. His band returns to the DC area this week to celebrate Halloween at the Anthem, where they made their debut in February 2018. After years without playing a gig in DC proper since the band's final two-night stand at 9:30 Club in 2011, Umphrey's McGee will be playing one of the biggest gigs of the year at the venue on DC's Southwest Waterfront. We chatted with Joel about his new book, his recent sit-in with Star Kitchen in Richmond, and tried to get a sneak preview of what fans can expect on Thursday night.

DC Music Review: Hey Joel. Thanks for taking the time to talk with me today. We’re all really excited for Umphrey’s McGee to make their return to the Anthem for Halloween!

DCMR: So Umphrey’s kind of outgrew the 9:30 Club almost a decade ago now and it seems like with the Anthem opening up, you've got a new home in DC finally. What was that first gig there like for you guys last February? What did you think of the Anthem? Joel Cummins of Umphrey's McGee at The Anthem

JC: You know, anytime you step into a room that is of superior quality, like the Anthem is, it's an exciting thing for the band. And it’s one of those places that has a real “wow” factor to it. We were thrilled to be to be playing there and actually had a really great turnout for the first time. I think we had about 3,000 people show up, so that was a really nice welcome to that nice spot.

Joel Cummins of Umphrey's McGee at The Anthem

DCMR: Why’d you guys choose it as your venue for Halloween this year?

JC: We identified the Anthem as a place where we’d really like to do some bigger shows like Halloween and this year made sense because we weren't playing LOCKN’ which previously there would be a radius clause on that, so we couldn’t really do it before this. So it was open to us this year and we figured why not? Let’s give it a shot.

JC: No doubt. We definitely appreciate all the fan encouragement! We’ll call it encouragement, right? (laughs)

DCMR: So you recently put out a book, The Realist’s Guide to a Successful Music Career. What inspired you to write it? Joel Cummins of Umphrey's McGee at The Anthem in 2018

JC: Well we've been working on it for about two years. So, you know, it's definitely a labor of love. And, for me, I've been asked by a lot of younger musicians for advice and different things. I think that this is kind of the culmination of that where I really wanted to put something more comprehensive together that hopefully gives a younger musician, who knows they have a talent or songwriting or whatever it is, kind of an idea of like here are all these different ways that people have found success today. It was important to me to include a lot of different perspectives on how people got to where they are. So that was the reason for getting all these other artists involved: Huey Lewis, Susan Tedeschi, Taylor Hicks, Chuck Leavell, Ivan Neville. And a lot of people of the other side of it too: Pete Shapiro, Alicia Karlin from Madison House Presents, Vince and Kevin, Umphrey’s management. I felt like including as many different perspectives so people can see, look here's how musicians did it and here's some people who are passionate about music but didn't want to necessarily be a musician.

Joel Cummins of Umphrey's McGee at The Anthem in 2018

DCMR: I think it’s really great that you cast a wide net like that. I say in some of my own work that it’s really important to know what you don’t know, and it sounds like that was something you had in mind, trying to make sure that you were getting the insights of people that are on all sides of what makes live music and music more broadly work.

JC: Yeah, absolutely. My particular scope of what Umphrey’s McGee has done in the music business is pretty limited. I mean, really, it's just the touring business and, you know, creating music on and off the road. So there are lots of other things out there and, you know, I'm happy to contribute from my personal experience because I think we made a lot of mistakes and so much of it is just like, “Hey, here's the way to really screw things up. Don't do this.”

DCMR: Was there anything you've learned from like the people you interviewed for the book that you really wish you'd known at Notre Dame?

JC: Oh yeah! So much, of course, but the one thing that I really learned was that the most important thing is to have a love and passion for music, or you're not going to get very far. I think there are lots of reasons to be motivated to do something. And if, if that passion isn't there in the beginning, that's something that people that are listeners or audience members can see through.

DCMR: The fact that you put “Realist” right in the title is kind of the most operative word in that book. Is there something you think, is a huge misconception that people trying to get their start in the music industry, can get fooled by or can derail their careers? JC: Well, I would say the hardest thing right now is to get people to care. And an important thing to remember is that if you're going out there and trying to make it as a live touring musician, you've got to get people in the door the first time, but once you've got them in the door, you've got to put out something that is going to make them say “I want to come back the next time this artist comes through.” I think that's probably the hardest thing because there's so much information and so many different things happening. That, you know, how do you create a fan base of people who appreciate or are as passionate about your music as you are.

DCMR: It seems like you guys really put a lot of effort into interacting with your fans and trying to give them those reasons to come back. And I think you specifically have because of the way you interact with fans on Twitter with asking me anything's or recommending shows to people. Do you think that kind of accessibility, the band's accessibility more broadly, has contributed to increased success over the last 10-15 years as the band has grown?

JC: Yeah, I mean, I hope so!  I always try to put myself in the fan’s shoes because you know, there are plenty of bands for whom I feel the same way. And so if I wrote something directed at Radiohead, and Johnny Greenwood responded to me, I'd be pretty excited. Okay, then I'm definitely going to support those guys. So, you know, there are a lot of artists who aren't that into the social media thing. And I think that's fine too. You know, for some people, it comes a little more naturally than others. It doesn't need to be forced, but I think that's something that can be a lot of fun. And you know, the fact that there are a lot of fans and we're all kind of in the same scene. Social media is the most fun when we're talking about things that are light hearted, or making musical jokes and things like that. So I think for that part, it's pretty cool. We're not just, you know, sending cassette tapes to our friends in different places. It’s a little more exciting now.

DCMR: A few weeks ago you sat in with Disco Biscuits bassist Marc Brownstein’s new band, Star Kitchen, and now they’re going to be opening for Umphrey’s on Halloween. Can you tell me a little about your friendship with Brownstein and what you love about this new band he's put together? JC: We go way back. Umphrey’s first appearance at Camp Bisco was back in 2002, so you know we started out as kind of competitive acquaintances. And then as the Dominican Holidaze thing kind of gained traction, we became pretty good buddies. Marc told me he started this band because he wanted to really get to know a lot of important funk tunes and older tunes that he might not have had as much of a knowledge of. So that's kind of what they're doing is putting their own spin on a lot of this classic music that I think is great to play for people and make sure other people know too. I mean, that's one of the reasons why Umphrey’s covers some of the stuff that we do is that we want it to continue in the popular lexicon. So, yeah, they were great in Richmond.

And you know, [keyboardist] Rob Marscher is an old friend of ours, too, we played a lot of shows with him and Addison Groove Project and then, of course, with Matisyahu. So it was really cool to see him play in this band. And it was the first time I've seen [guitarist] Danny Mayer and [drummer] Marlon Lewis play. And, again, two great players. Marlon just blew me away.

But yeah, it was cool to see you know, there's obviously a good contingent of Biscuits fans there too who came out and supported this and it made me made me happy about our community because I got to hang out with some people that were fans and everybody was really friendly and excited to be there and open to getting down to these tunes that Marc and the band wanted to share. Joel knows the secrets of their Halloween show, but he's not giving any sneak peeks!

DCMR: You guys have done some crazy Halloween gags over the years like mashup sets and fan selected sets. Anything you can tell us about what's in store for Halloween in DC?

JC: Well, I would say that the visual stuff that we put out is a little bit of a clue and that's all I'm gonna say for the moment. But I'm pretty excited about what we're doing. We have something in store that's pretty fun.

Joel knows the secrets of their Halloween show, but by the look in his eyes, you know something great is coming!

DCMR: Awesome. Well I’m sure we’re all going to have a good time on Halloween then! Thanks again for taking the time, Joel, and we’ll see you in DC soon!

Enjoy all the photos of Joel Cummins captured by several DC Music Review photographers over the years.