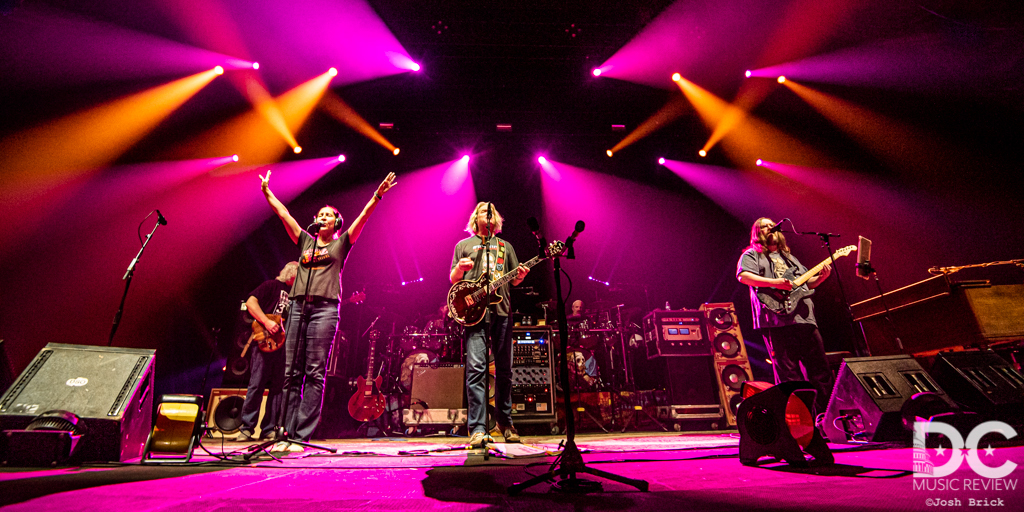 Dark Star Orchestra returned to The Anthem for the third consecutive winter on Friday, December 6 – this time for something a little different. Known for introducing fans young and old to step inside a hand-picked Grateful Dead show for the set that original band members designed and organized themselves, Dark Star switched it up on us a bit this go around. Hitting the ground running, the band opened with an inspired "St. Stephen" before launching into a version of "Shakedown Street"  played at just the right pace to start the crowd on the journey. The path that it ended up taking during second set however,  was something that I don't recall seeing or experiencing from the band in recent years, or ever really - (festivals get blurry, what can I say?) The elongated drum solo that went on for what seemed like forever, was so hypnotizing that at some points I felt transported back to that state of mind and warmer temperatures of summer shows past.

Balloons were glowing bright and bass from the drum section bounced off the walls of the venue as we followed Rob Koritz and Dino English on an electronic jam journey. When we finally deboarded, we were released back into the world of the Dead and followed that road all the way back home. A set-closing segment of "Dark Star" > "The Other One" > "Turn On Your Lovelight" was the ultimate crowd pleaser and proved to be the meat of the show. The lights that DSO and The Anthem are both known for in combination with memories for some and just straight good music for others, were also in attendance Friday night. I really can't say that there has ever been a time when I've seen Dark Star and haven't had a good time.  Many a time, they play just the right pace of a song at just the right moment and it makes the night.  Other times, I meet or see people that are just genuine and enjoyable to be sharing space with and that's pretty much what makes them a band I jump at the chance to see every time I can.

Probably one of the best parts at this particular show, was the encore where not only did Rob come out and explain that they were, in case we hadn't already noticed, were doing their own 'thing' at The Anthem this time.  Mentioning the jam that took a turn above and getting a roar from the crowd after asking if we wanted more, Rob made sure to clarify that he was talking about more music and not more drum solo because, "Nobody needs more drum solo in their life". The band treated the DC Deadheads to a stunning rendition of "Low Spark of High-Heeled Boys" (Traffic) and a rousing "Casey Jones" for a tasty encore.

After 20 years together and close to ,3000+ shows under their belt, they continue on and celebrate the new year up in New Jersey with two nights of their 'Cosmic New Years' celebration and Jam In The Sand close on its heels in mid-January down in Jamaica.

The band also just announced their lineup for Dark Star Jubilee, their very own festival that takes place for the ninth year at the end of May out in Thornville, Ohio - a venue fans are more than familiar with. Check out the full line up announcement below!