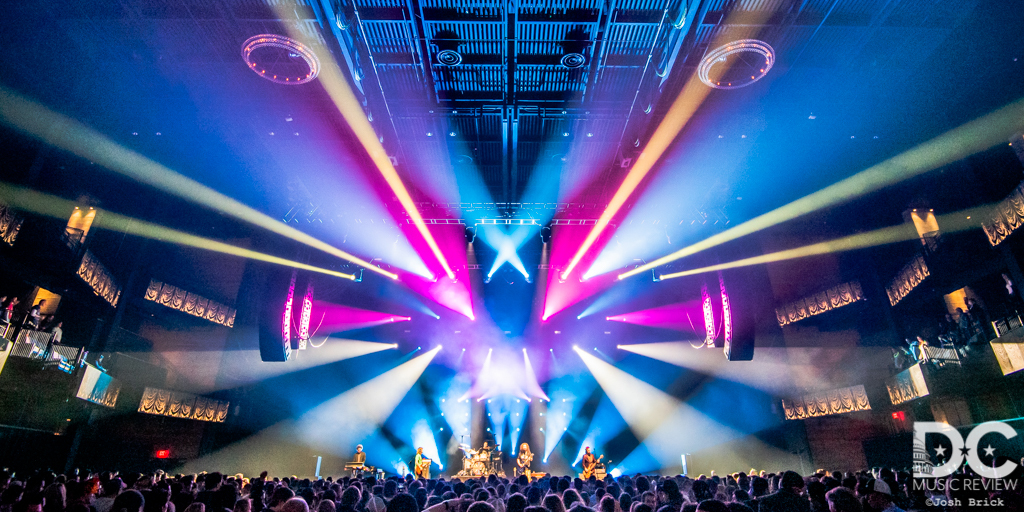 If you have yet to experience the high-energy performance that is Pigeons Playing Ping Pong, you are seriously missing out. What a flocking weekend for the Baltimore-based group, who has been gaining fame and followers by the thousands after years of performing at festivals across the country and even hosting their own every year in May. With a two-night run in DC this past weekend – something that not many bands can pull off – the fellas ripped through a killer show Friday at 9:30 Club and proceeded on to their biggest show to date at The Anthem on Saturday. Joining them was a great addition known as Here Come The Mummies, a band that always leaves fans wondering about their true identities. Dressing the part, covered in bandages and making it impossible to see their faces, it's been rumored  that they are all musicians signed on labels and have contracts that would make it impossible to perform together otherwise. Regardless of their identities, Greg Ormont, lead singer of Pigeons resurrected them about a half dozen times from 'The Crypt' back to the stage where they were able to take the show a level even higher, which was no easy task!  On one return in particular, the collaborating artists played a version of "Signed, Sealed, Delivered" by Stevie Wonder that delighted the crowd and a saxophone battle that came to fruition took it even higher.

Combining the high energy of the foursome that leads the flock, with the amazing crowd that seems die hard for them and a glow show that showed elements fans hadn't seen before, made for a phenomenal time Saturday night.  If there is a chance for getting to see this band play live, do not pass it up!  The amount of fun that is clearly taking place onstage, is contagious like an instant jolt of electricity straight to your feet commanding you to move to the beat. Throughout the set, the band commanded the stage and their loyal followers reciprocated the excitement song after song.  The fancy footwork behind the guitar that Ormont displayed was entertaining to say the least and inspiring to say the most.  Each and every man on stage had the energy of a child that never seemed to cease and playing through their catalog it gained more and more strength as well.  Playing old favorites like "F.U." as well as treating fans to new music from an album coming very soon, the bands interactions with the audience was something that also enhanced the connection to the crowd. In addition, Manny Newman (Lighting Director), showcased his talents, painting a beautiful canvas of light throughout the performance, wowing the audience with his creativity and synchronicity with the music.

Their love for DC was more than clear and they reminisced about their first show in the city six years ago, admitting the crowd was probably about thirty people. Since that show, they have become a staple at festivals across the country sharing the stage with some of the biggest and best in the jam scene and beyond.  Just this past summer, they dominated the scene opening night at Peach Festival.

The festival that they put on every May, Domefest, is one that DCMR staff has attended for years and can agree that 'there's no place like Dome' and it just so happens that they just also released the lineup, check it out below!  The band also invited everyone to join them for their New Years' run dubbed the 'Electric Kool Aid Asheville Test' in, you guessed it - Asheville, NC! Excited to announce that our good friend and @domefestofficial alum Casey Russell of @themagicbeans will be joining us on keys this weekend in DC along with @hctmummies horns!! 2-night passes and single night tickets to @theanthemdc on 12/7 are still available, link in bio! . .