So Glad They Made it! Greensky Bluegrass Brings Joy to The Anthem for Two Nights 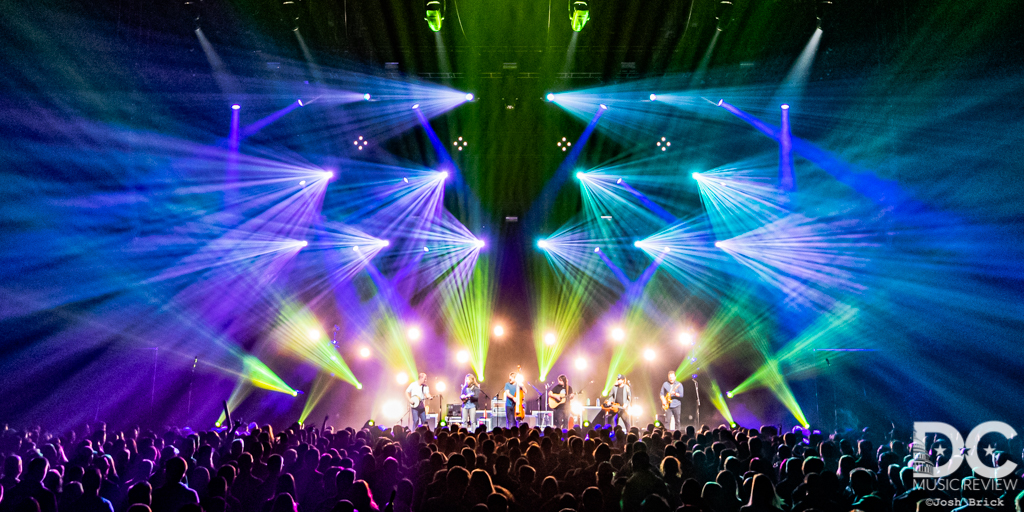 The boys managed to do it again – coming to D.C for a two-night run and leaving fans exhausted from a great party that will not soon be forgotten.  This time Greensky Bluegrass also brought with them two great opening acts that we often get to see perform alongside each other at festivals and on tour – Cris Jacobs made his way down 95 for Friday night and Ghost Light shined bright for night two. After a killer show earlier in 2019, where Jacobs joined in on the fun up in his native Baltimore, we knew it would be a hard show to top, but Cris always manages to get a crowd ready for having a great time no matter the location. It was an exciting night for Jacobs as he unveiled his new, completed band roster for the first time. Backed by his tight rhythm section of Todd Herrington (bass, vocals) and Dusty Simmons (drums, vocals), the Marylander added two Richmonders to his arsenal - Ben White (keys, vocals) and Corey Wells (guitar, vocals). The band was exceptionally tight for their outing – playing several tunes from Jacobs' 2019 release, Color Where You Are. The quintet demonstrated a full sound – augmented by Wells' tasteful slide playing and White's piano prowess –as they performed "Painted Roads," "Buffalo Girl," and the instant classic, "Under the Big Top." One of the highlights was "Holler and Hum," that featured Wells and Jacobs weaving their stellar guitar playing together into a beautiful mosaic of sound for an extended jam - reminiscent of a Phil Lesh and Friends (of which Cris has played) type feel. Greensky took it back a bit for fans when they opened with "Handguns" and started out mellow  to ease the crowd into what was in store. Introducing the audience to the "best vibra slap player in bluegrass", Guido, earlier than usual, "What You Need" had a strong start and an even better finish to give us a taste of something we normally don't get enough of.

Declaring their love for Cris Jacobs Band, The Anthem, people in the front row and the weekend in general, Paul Hoffman (Phoff; mandolin) was grateful indeed and a shortened version of "Past My Prime," made attendees feel the exact same. Closing out the first set with two of my personal favorites, "Room Without a Roof" > "Run or Die" made everyone excited for the bands return to the stage and "Jaywalking" was just the way to prove we were getting ready to get wild.

A few songs later, attendees were treated to an always-entertaining conversation between Paul and Anders Beck (dobro) onstage after "Too Far Away" where we learned why kids tend to say "Windshield" is a favorite of theirs.  Wearing the 'Explicit Content' warning with pride, our favorite dobro player explained how excited he was to be able to feel because the curse usage made bluegrass badass.

The guys worked their way through a great second set welcoming Cris Jacobs onstage and teasing "Bone Digger" which got everyone excited however instead decided to play "Forever Young" (Bob Dylan) in honor of musical offspring that are part of the family.  Continuing on through a strong last few songs, the band ended with a Phish cover to the delight of attendees as they closed out Friday with "Chalkdust Torture" bidding the crowd goodnight and leaving us all excited for the return Saturday night. Night two included magic in more than one way if you ask me. Ghost Light opened a set with no song breaks, segueing between "Best Kept Secret" > "Synth Driver" > "Diamond Eyes" before completing the musical palindrome. The band pulls together their amazing individual talent to create a stunning cumulative sound like no other. Saturday was no different as all cylinders were firing - highlighted by beautiful vocal harmonies spearhead by Raina Mullen, spectacular guitar work by Tom Hamilton and Holly Bowling's mesmerizing piano mastery.

Greensky had a special night in store for us on Saturday. Sharing a story about a friend of his that they've nicknamed "The Reverend," before playing anonymous tune - Hoffman told the audience about a night when he had a dream that the friend was in. Telling audience members that the next day he woke up and texted the friend to share the dream, he got a reply that the friend has also had a dream the night before about Paul. Not one to believe in simple coincidences personally, this was a story that I took to heart and made me value the crowd and friends that music built even more.

Coming together for something that they had only talked about, but had yet to come to fruition until this night was when the stage cleared except for Hoffman, Bowling and two spotlights.  What came next was something that was so pure and so entrancing yet also unexpected. Hearing the electric duet of the two musicians perform a version of "Windshield" that gave me chills is a memory that will be forever engrained in my Greensky concert catalog.

The remainder of the show was a barnburner in every sense of the word – especially when Bowling and Hamilton emerged for the culmination of the show – for a monster take on the apropos, "Leap Year." The augmented band  returned for a joyous take The Spencer Davis Group's "Gimme Some Lovin'" and all of us were indeed, so glad we made it. Click here to see the setlist for Greenky Bluegrass's performance at The Anthem on January 31, 2020

Click here to see the setlist for the Cris Jacobs Band's  performance at The Anthem on January 31, 2020

6. Under The Big Top

Click here to see the setlist for Greenky Bluegrass's performance at The Anthem on February 1, 2020

Click here to see the setlist for Ghost Light's performance at The Anthem on February 1, 2020

Our limited edition poster for this weekend at @theanthemdc, titled “All For Money” by Owen Murphy/@onedropdesignstudio. Pick one up at the merch table tonight or tomorrow night. Doors 6pm, @cris_jacobs 7:30pm. See you soon!

setbreak smooches are the best. thanks dc that was a real blast.

last night holly and i played windshield as a duet. we’ve been talking about it for a long time and last night, without rehearsing it, we went for it. it’s an honor when friends learn and cherish my songs. really made my heart full.