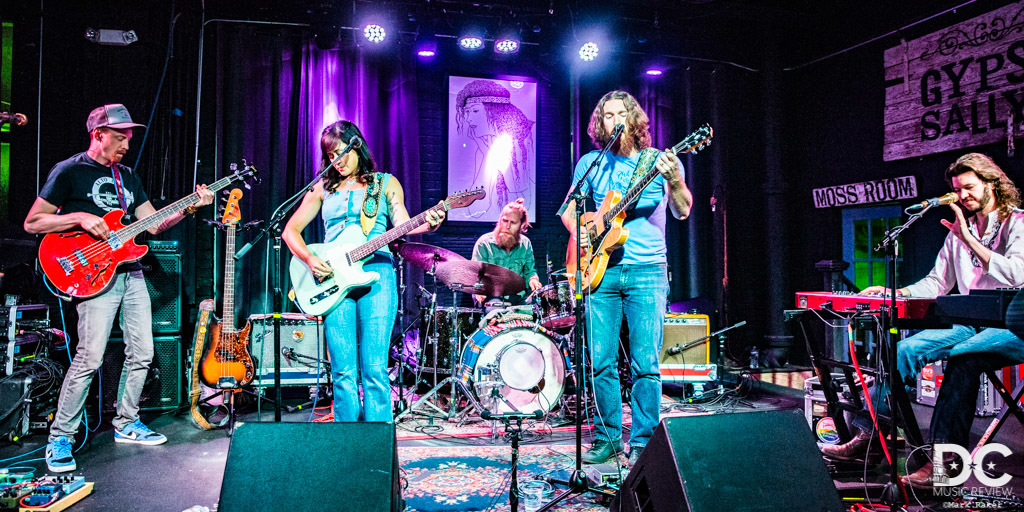 "So happy to be back here at Gypsy Sally's", Grahame Lesh declared after kicking off Midnight North's evening last week in DC. Midnight North opened their night with their most recent new track, "Long View." The song was written by guitarist Grahame Lesh and drummer Nathan Graham and will be featured on the next studio album. Their second tune revealed Elliott Peck's country roots with "Silver and Gold," a featured track from her own recently released album Further From The Storm. The night highlighted a broad selection of originals sprinkled with some outstanding covers, and Lesh and Peck alternatively trading off lead vocals throughout the long set. Both have incredible range and entertained the rhythmic dancing and enthusiastic Gypsy's crowd - purely demonstrated during Elliott's lead on fan favorite – "Playing a Poor Hand Well." They pulled out a few additional songs from their Under The Lights album , including "Roamin," "Greene County," and title track "Under the Lights." Among the other covers were Tedeschi Trucks Band's "Midnight in Harlem," a real treat getting to hear this song live twice this week – for those that also caught TTB at Wolf Trap – and "Keep Your Lamps Trimmed and Burning," a favorite of Hot Tuna. The band also broke out with "The Shape I'm In", by The Band.

Before the night's end, the band provided a unexpected treat with a double encore, first with Levon Helm's "When I go Away" before Gypsy Sally's owner, David Ensor, celebrated his birthday evening by joining the band to close the night for a great rendition of Dylan's 'You Ain't Going Nowhere'. Ensor showed why he loves the jam music scene so much, emerging from The Moss Room to serenade the fans he considers family. Midnight North swings back near the area later this month, for the LOCKN' Festival in Arrington VA, August 22-25.

Click here to see the setlist for Midnight North's performance at Gypsy Sally's on July 24, 2019