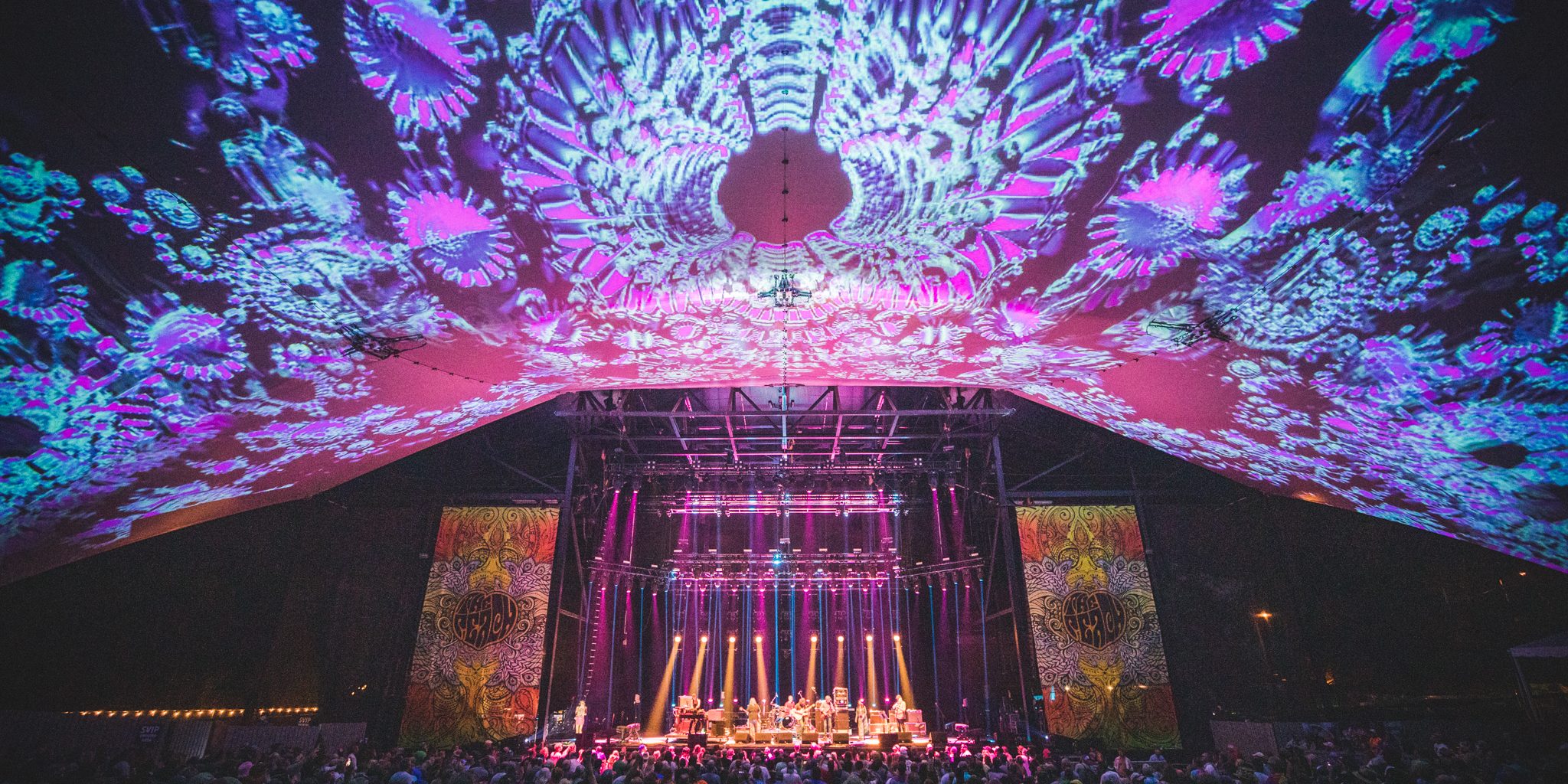 ​​Beautiful weather, an incredible lineup, smiling faces, and an amazing experience all together, Peach Festival and its organizers know what they are doing!  Montage Mountain, located in the hills of Pennsylvania, provided a breath-taking setting for a four-day whirlwind of amazing musicians, new friends and moments that will not soon be forgotten. Being a first timer to this festival, and deciding that camping was my preferred method of lodging, there was a lot I had heard about years past and the struggles that campers face.  Thankfully, 2019 was blessed with nothing but sunshine and warm days, followed by refreshingly cool nights.  Only one minor threat of inclement weather, that turned out to pass right by, delaying music only for about 45 minutes, was nothing.  Yes, my feet are sore and calves are a little thicker than they might've been last week due to the climbing, but I wouldn't have it any other way.  I made friends with neighbors and other campers along the way as I walked back and forth countless times, and even was lucky enough to sleep in my hammock all four nights next to my campsite because the weather was just right.

Not only was I lucky enough to have an amazing camping experience, but was also gifted a line up that made no less than about eighteen of my close friends text or comment on my social media that they were incredibly jealous, wishing they were there as well and wanting details of all sets.

Whenever possible, I try making sure that I attend both the first and the last day of music festivals, in order to not miss anything, and the Billy Strings into Pigeons Playing Ping Pong - String Cheese Incident sandwich is a perfect example of why.  All three bands got the crowd thirsty for what was to come and, especially Pigeons, proved why they are a great addition to any lineup and why they are also able to draw a crowd when they put on their very own festival, Domefest in early summer each year.

Friday, all three stages were opened and ready to rock, and with multiple bands playing sets at the same time, festival goers had decisions to make.  Peach had it so that set times of bands were staggered enough, even if jumping from one stage to another, you could still at least catch some of the first act before hoofing it to the next.

One of the biggest appeals of the lineup at Peach was that you had a little of everything as far as musical genres - you've had the jamgrass scene on lockdown with Yonder, Stringdusters and Greensky.  Reggae took a seat at the table with legend Stephen Marley and also Bumpin Uglies.   And you also had faces that have been in the music scene for decades - Warren Haynes, members of the Allman Betts Band and Phil Lesh.  Just about everything in between could also be found on the artist list, with bands that are great to hear live and dance to, like Fruition, Maggie Rose, Lettuce and JRAD.  It's a festival where attendees are there for such a wide variety of musical talent and also get exposed to music that they leave new fans of as well.  One of the biggest highlights, when compared to other festivals is the stacked lineup paired with a more than affordable ticket price. Saturday really was a lineup that still makes me giddy every time I read it and see clips of or hear commentary of performances that happened.  Someone I personally have found to be an amazing force to be recokoned with is Kat Wright and she was the first to take the Mushroom Stage.  Her sweet soul music, backed by a strong brass section carried me on high right over to another musician who played music that is hard to argue hasn't helped countless people through struggles.  Stephen Marley, beautifully singing not only his own originals like "Meditation", also chanted the lyrics and songs of his fathers countless hits, turning the crowd into a whole new animal as they repeatidly shouted in response to his onstage prompts, "We love reggae music!!!" while singing along to every note.

Now, let me tell you, the road from Lettuce to Fruition to Greensky to Maggie Rose was probably the exact warm up for what was to come, but boy did it make my knees wonder how much more they could take with all the dancing and moving that was simply impossible to resist.  The funk from Lettuce to the fun that Fruition always brings, led us right into an amazing set by Paul Hoffman and his crew.  Afterwards, Maggie Rose showed us why Change the Whole Thing ​is a perfect name for her album that was released in September.  Her website describes the work as encompassing "a blend of American music melding Rock, Soul, Rhythm and Blues, Country and Gospel" and I couldn't agree more!  It's something you have to see live to really understand.

*look for the interview with Maggie Rose that DCMR did (on a ski lift!!) to learn more about this spit fire musician, very soon

​Horns continued to rule the roost at Peach as Trey Anastasio and his band took to the Peach Stage for the first of his two sets.  One of the other great things that Peach provides is not only an amazing lineup and setting for the attendees onsite, but also allows the fans who weren't able to make it to see in person, the chance to stream some of the best sets live from their couch.  Such was the case with Trey as most Phish fans are used to never missing a chance to couch tour. We here at DC Music Review would also like to extend a heartfelt congratulations to Joe Russo on the birth of his second daughter!  Coming three weeks early, this meant that there were a few changes when JRAD took the stage.  The band felt the same as most of us did, in the fact that they had very big shoes to fill and decided to play their first ever show with two drummers while the man himself celebrated his growing family.  A great set left the crowd wanting so much more and the campground was exhibit A of that fact as they refused to stop the music and the fun pretty much all night long.

Never missing a Sunday show is great advice and never more important than on Montage Mountain.  With Yonder Mountain opening Sunday on the Peach Stage, Allie Kral took us to church, as her incredible fiddle playing mesmerized the crowd that gathered early under the shade. Marcus King and his southern charm did just about the same and I'm still convinced that he could be the love child of Warren Haynes and Susan Tedeschi easily in an alternate universe.   Speaking of the man himself, someone that I've been missing even more than Warren is Grace Potter, a timeless beauty and hippie at heart that never ceases to amaze a crowd with her vocal prowess.  The two shared a stage wonderfully, playing songs from both of their individual musical catalogs and showed us how delicious the blend could be. Next up, we got to see more of Warren as a friend of, not the devil, but of Phil Lesh as Phil and Friends closed out this mind-blowing weekend that  we got to share with friends of our own, old and new.  Also welcomed to the stage were ​​John Scofield, Grahame Lesh, drummer John Molo, singer Elliot Peck and Holly Bowling (whom we also caught a glimpse of jumping onstage with Fruition earlier in the weekend).​  One of the best versions of "St Stephen" that I've ever heard ended up coming out of this set as well as a very extended and well-timed "Playing in the Band".

I truly can say that this is one of those festivals that I feel as though I'll never forget and ​am excited to return to year after year.  Camping on a mountain top is not an easy fete but a water park, amazing lineup and people that are so genuinely happy and helpful to their neighbors made it all the more bearable.   For those who don't think that they can hack it on the mountainside, there are plenty of other options for lodging that include shuttle service to and from the festival site.    It really is all about the music and that is a theme that Peach does not forget.  Keep your eyes out for news about it and start planning for Peach 2020!

Credits & Special Thanks:  DC Music Review would like to thank Christopher Hoffman & Matt Sweder for their exceptional photographs and contribution to this article.

The following videos are provides courtesy of Nugs.net's YouTube Channel. Click to Purchase the Soundboard Recording for Pigeons Playing Ping Pong on July 25, 2019 Click to Purchase the Soundboard Recording for Billy Strings on July 25, 2019 Click to Purchase the Soundboard Recording for The String Cheese Incident on July 25, 2019 Click to Purchase the Soundboard Recording for The Infamous Stringdusters on July 26, 2019 Click to Purchase the Soundboard Recording for Pigeons Playing Ping Pong on July 26, 2019 Click to Purchase the Soundboard Recordings for Dopapod on July 26, 2019 Click to Purchase the Soundboard Recording of moe. on July 26, 2019 Click to Purchase the Soundboard Recording of BIG Something on July 26, 2019 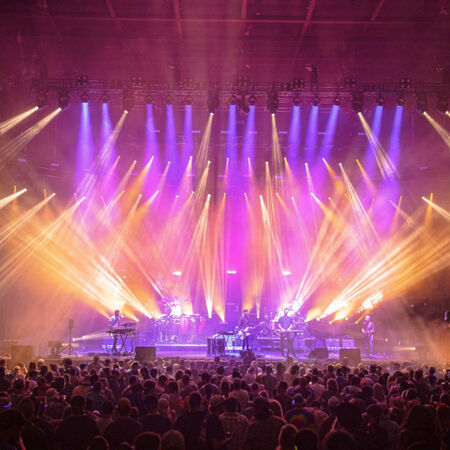 Click to Purchase the Soundboard Recording of Lotus on July 26, 2019 Click to Purchase the Soundboard Recording for Greensky Bluegrass on July 27, 2019 Click to Purchase the Soundboard Recording of Yonder Mountain String Band on July 28, 2019 Click to Purchase the Soundboard Recording of the Trey Anastasio Band on July 27, 2019