Umphrey’s McGee Calls the Police on Halloween at the Anthem 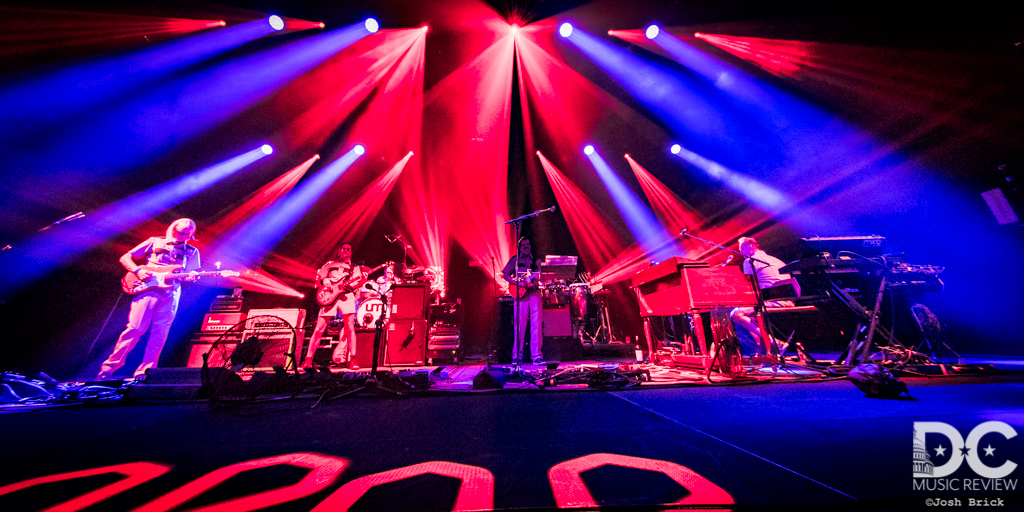 Umphrey’s McGee made their triumphant return to Washington, DC on Thursday, playing their second ever show at The Anthem.  The sextet treated attendees to a Halloween night party – complete with costumes, impressive jams, and a musical gag that both amused and delighted fans of the prog-rock infused jamband. Merely a night after the Washington National's World Series victory, the Anthem was filled with incredible energy as the band and its devoted fans celebrated one of the most enjoyable events in the band’s annual touring schedule. Umphrey’s McGee has made a tradition, like many jam bands, of coming up with exciting musical ideas to raise the stakes for their annual Halloween shows, like arranging cover songs into mash-ups and coming up with crazy mash-up costumes to match or allowing fans to select an entire set of covers through an online poll leading up to the show. This year, dressed like the characters from the hit comedy film Super Troopers, the band paid homage to one of their musical inspirations - The Police - and interspersed seven classic covers by the British trio across two outstanding sets of music. Philadelphia-based quartet Star Kitchen opened the show, playing a set of funk and soul-infused instrumentals. The band, a side project of Disco Biscuits bassist Marc Brownstein, provided an uptempo, energetic set to open the evening. Star Kitchen shows a very different side of Brownstein’s musical inspiration and abilities. A far cry from the electronica and psychedelia of the Disco Biscuits, Star Kitchen harkens back to the sound of funk bands and session musicians like the Meters or Tower of Power. In addition to Brownstein, guitarist Danny Mayer and keyboardist Rob Marscher make up the melodic section of the band, and drummer Marlon Lewis rounds out the rhythm section. Lewis was outstanding throughout the set and clearly showed his ability to serve as a glue that holds the band together. The band also  added another element to their sound by featuring saxophonist James Casey of Trey Anastasio Band. Foreshadowing what was to come throughout the Umphrey’s McGee sets, the band dressed as inmates, with Casey dressed as a police officer, and at the front of the stage they placed a sign indicating that the band had been arrested for the crime of “KILLIN IT.” When the six mustachioed members of Umphrey’s McGee took the stage in their highway patrol uniforms and sunglasses, they kicked things off with “Synchronicity II,” launching right into the Halloween gag that would run throughout the rest of the show. As drummer Kris Myers sang the opening notes before guitarist/vocalist Brendan Bayliss took over vocal duties for the verses, it became clear that this choice to pay homage to the Police would fit the band like a glove. The effect-laden 80s guitar riffs suit the stylings of Bayliss and guitarist Jake Cinninger, and keyboardist Joel Cummins was able to lean into his synthesizers throughout the show. While the band had previously played some songs by the Police, including “Message in a Bottle,” which closed the first set on Halloween, six of the seven songs performed that night were debuts for Umphrey’s McGee. Following up the opening cover with an original, “Bridgeless,” provided a short, funky segment of improvisation that offered some minimalist melodies from the two guitarists and a thumping bass line by Ryan Stasik. Then “Ocean Billy” opened things up with a 16+ minute jam that heavily featured the guitar effects and synthesizer that would be showcased in Police covers throughout the night. At this point, the band played the Police’s “Reggatta de Blanc,” which was essentially the only cover with an extended segment of improv and segued seamlessly into a shortened version of “Utopian Fir.” Following the first minute or so of “Fir,” Umphrey’s performed their aptly titled song “The Fuzz,” a funky groove that simply had to be included in this Halloween set for obvious reasons. Following a disco-tinged dance party in “Night Nurse,” the band closed their first set with the Police classic “Message in a Bottle,” performed by the band for the first time since 2010, and in full for the first time ever. There were still plenty of fireworks in the second set, as the band returned from their intermission with “Dump City,” which featured an outstanding jam where all six members of the band meshed magnificently, hooking onto the licks being offered by each guitarist and moving back and forth between the new sections and earlier themes seamlessly. When Umphrey’s prepares to release their Hall of Fame 2019 compilation of stand-out jams, this rendition, which clocked in at nearly 19 minutes, will surely be on the ballot. After “Spirits in the Material World,” the band would offer another lengthy jam in “Draconian” and lively performances of “Kula” and “Can’t Stand Losing You” before providing another huge highlight in their anthem, “Nothing too Fancy.” This song took an already fantastic show and made it an even bigger and more exciting party as the band continued to show great interplay and raise the energy level in the room. After giving the audience one opportunity for a breather with a downtempo cover, “King of Pain,” the band would end with the final sections of “Bridgeless.” An encore featuring the pop hit “Every Little Thing She Does is Magic” and an emotional rendition of “Hajimemashite,” in which Bayliss changed one line of lyrics to “I’ll shave this mustache now,” put a bow on the evening. Following the Halloween night rager at the Anthem, Umphrey’s McGee continued on to Philadelphia for two stellar nights at the Fillmore, closing out their fall tour with a fantastic weekend of shows before they host their first festival in Charleston, SC this weekend.

Click here to see the setlist for Umphrey's McGee's performance at The Anthem on October 31, 2019 (Halloween)

1. Every Little Thing She Does Is Magic (The Police cover)
2. Hajimemashite

The theme for tonight was "The Police" and all band members were dressed as police officers. Performing "The Fuzz" was especially hillarious given the musical cosume of the performance.

Shall we? If you can’t just us live, join us from the couch. Link in bio. Click to purchase the October 31, 2019 Soundboard Recording from Nugs.net