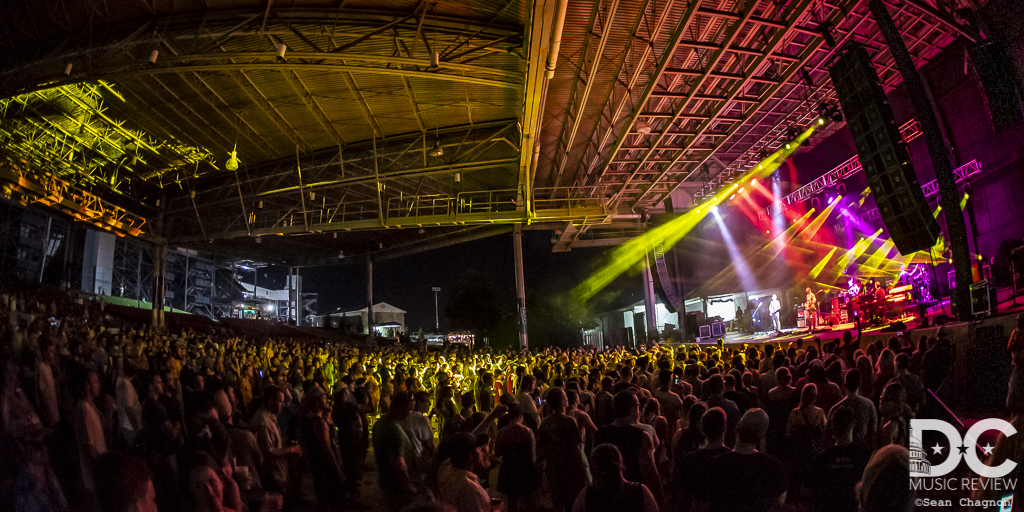 Umphrey’s McGee is a band that has a reputation of delivering an awesome, hard rocking  show that is a little heavier on the jam band scale. It may not be the exact setlist one was hoping for, but at the end of the day, they never disappoint, and usually pull out some fun surprises along the way in the form of a fun cover or guest appearances. The classically trained sextet covers all musical genres from hip hop to classical, metal to jazz, you name it, they can play it. This is a huge part of what keeps show after show unique. On this particular muggy night in Richmond, Virginia, at the VA Credit Union live at Richmond International Raceway, UM treated this group of Umphreaks to another great night of music. North Carolina’s Big Something opened the show with their reggae infused psychedelic party rock that had the crowd grooving right out the gates on this hot, muggy VA evening. Opening song Megalodon got the party started and featured lead guitarist Jesse Hensley and saxophone/EFI player Casey Cranford ripping through solos. Other highlights from the set were "The Curse of Julia Brown," Pearl Jam's "Alive," and fan favorite "The Flood." Umphrey’s kicked their first set off with “Nipple Trix,” a song that hadn’t been seen on a setlist in almost a year. Next was a jammed out fan favorite that allows drummer Kris Meyers to work the double kicks, “Bridgeless.” “Rocktopus,” a nod to 80’s rock, followed, which was then followed by almost 20 minutes of “Push and Pull>All in Time>Wife Soup.” As usually done, “All in Time” was left unfinished to be brought back later in the show. A ten minute “Miami Virtue” and the finishing of “Bridgeless” closed out set one. Set two began with another fan favorite, “Wappy Sprayberry” which started over thirty straight minutes of segued songs which also included “Deeper,” the super bluesy “Whistle Kids,” a must listen if your kids have stormed your room on a hungover morning, and the aptly named party tune/jam vehicle “40’s Theme.” Umphrey’s brought the arena rock on an 11 minute “Attachments” which was jammed into Led Zepplin’s “Ramble On” with a “Third Stone from the Sun” tease. Umphrey’s has played a few shows in the last year with Jason Bonham, John Bonham’s son, and have been frequently covering Zepplin. The debut with Jason was at Lockn’ 2018 and was an absolute scorcher. The set was wrapped up with “Den” and the encore consisted of the funky, bluesy sing-a-long “Hangover” with a La Grange tease and the finishing of “All in Time.”

It was another solid performance by the UM squad including top notch lighting and sound by Jefferson Waful, who will be dearly missed upon his impending departure, and Chris Mitchell respectively.

Click here to see the setlist for Umphrey's McGee performance at Virginia Credit Union Live! on 2019-07-19 Click to purchase Umphrey's McGee's Soundboard Recording from this performance