Fond Memories of The Lil Smokies at The 9:30 Club On March 7 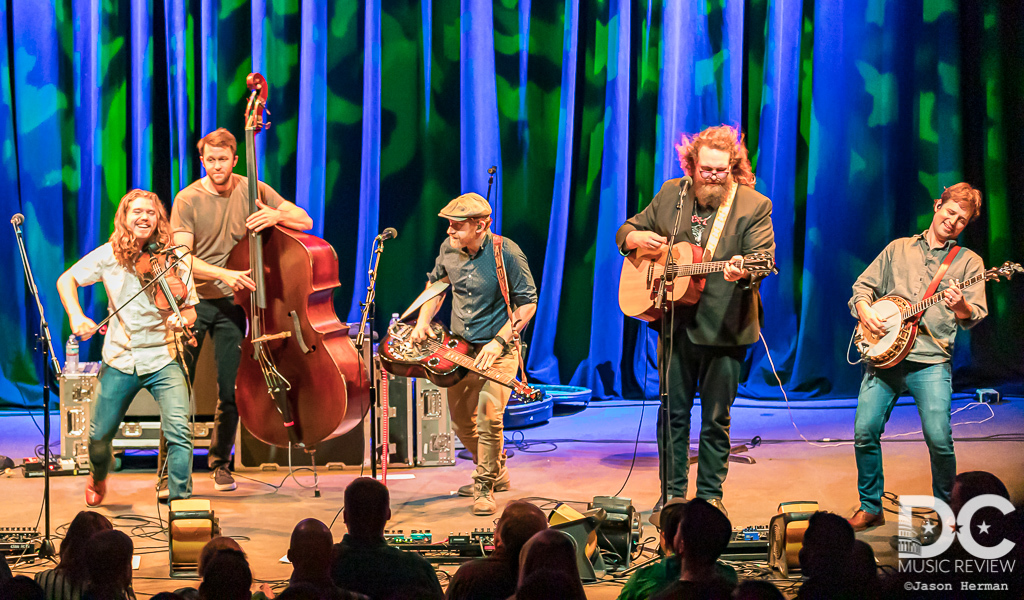 It has been almost a month since The Lil Smokies graced the stage of the 9:30 Club. This was also the moment that many of their fans in the region had always looked forward to as this was their first headlining appearance at DC’s most prestigious and fabled venue. The Lil Smokies were formed back in 2009 in Missoula, Montana, and this quintet has logged what seems like millions of miles and countless hours on the road in the past 11 years playing to countless fans - earning new fans at each stop they have made. As the years have passed, The Lil Smokies have built up quite a reputation for themselves as a must-see act. For the last few years, they have been the defacto choice for many top-tier headliners as their opening act because of their frenetic and explosive stage presence in addition to their powerful music. Already in their career, they have shared the marquee with the superstars of progressive bluegrass, including The Infamous Stringdusters, Billy Strings, and Greensky Bluegrass (amongst others). Recently, we have all celebrated as they’ve performed at legendary venues such as Red Rocks Amphitheatre and have been a mainstay of the festival circuit. If you have not seen Andy Dunnigan (dobro), Matthew “The Rev” Rieger (guitar), Jake Simpson (fiddle), Scott Parker (bass), and Matt Cornette (banjo) on stage you should certainly make them a priority once life returns to normal again.

When DC Music Review first started out, this band was already on several staff members’ radar who raved about their performances. Once introduced to the band, we, like every person who sees the band perform live, were mesmerized by their live performances. Our photographers were in awe of their frenetic energy and, at times, were left exhausted by trying to adequately capture their stage presence. What we must point out and emphasize is the true determination of this mighty band. At many concerts, you will see a wide range of merchandise at the merch booth, and The Smokies did have merchandise available, but unlike others, their prices were very modest and welcoming to the pocket. The band intends to win over fans and help extend their fanbase, and $15 for an artist t-shirt is about as low as we have seen at the merch booth. At the 9:30 Club, we found people lined up happy for the opportunity to purchase one of their T-Shirts (Note: A T-shirt we purchased this evening has been lovingly worn many times during our social distancing and been seen on many Zoom rooms.   Note of Appeal: Please purchase some new merchandise the band has for sale and it appears below the article.)

Jake Simpson and Andy Dunnigan light up the stage! This band, from modest beginnings, is still working their way up the band hierarchy, and we have been delighted to see them added as a near-headliner to many music festivals far and wide, including Charm City Bluegrass 2020 (postponed). One would think that with their larger than life personalities and how many performances they put on a year, they were living the rock and roll dream. Two years ago, when we first sat down with the band, we asked them how life on the road was and how their tour bus was treating them. They laughed amongst themselves as they explained how a tour bus would be a dream and how they toured in a box van and joked about learning how to adjust to sleeping sitting up now and again. When we spoke to their manager during this evening’s performance, they did note that they were now touring in a Sprinter Van - an upgrade from their last touring vehicle. We are sincerely looking forward to the day that this deserving quintet puts on some onesies as they learn the new skill of sleeping horizontally while being driven from town to town on their tour bus.

This leads us to The Lil Smokies performance at the 9:30 Club and why DC Music Review is huge fans of this band. It was a crisp but still warm evening in the Nation’s Capital, and some members of the audience joked that at least there was no sub-artic Polar Vortex over the Capital as in previous years. There was only a slight uneasiness in the air, but nothing that would sway a very large gathering of Lil Smokies fans from celebrating their beloved band’s headlining debut. It was not too long ago that we danced the night away with the Smokies at sold-out smaller venues in the region, including Union Stage and Pearl Street Warehouse. Each of the other venues holds approximately four-hundred fans while the 9:30 Club holds twelve-hundred individuals. The audience for this performance was much larger than four-hundred fans, and those in attendance were happy to finally have a little more dancing room than they would normally have at a Lil Smokies performance. The Lil Smokies do not rely on grand light shows for any of their performances. Instead, they rely on their persona, natural talent, genuine nature, and frenetic stage performance. Armed with a few air blowers on stage to keep the band cool, the band set out to delight fans new and old. As always, fans were delighted by The Lil Smokies’ signature performance attributes, Matt Reiger’s hair whisking in the wind, and the band’s animated performance. Andy Dunnigan has to be one of the most energetic bluegrass dobro players in existence as he walks an immeasurable number of steps during each performance and collaborates with each member of the band throughout the performance. We certainly cannot tell you how many times Dunnigan delighted the audience as he pushed his dobro up alongside the likes of Jake Simpson’s fiddle, Matt Reiger’s guitar, Scott Parker’s bass, and all the way to Matt Cornette’s banjo on the far side of the stage. It was thrilling to see each member of the Lil Smokies have small fantastical exchanges with one another.

One could not help but notice the pure musical talent and intensity of the band that was produced this evening. For such a large venue, the performance had a fresh and intimate resonance with the audience as we could hear Dunnigan’s boots echo in the music hall as he kept to a steady beat. Midway through their performance, there was a very sincere moment when Jake Simpson spoke to the audience from the depths of the band’s heart. Simpson told the audience how very important Washington DC was to them and when they were given a chance to perform at this venue, they jumped at the opportunity. The band stomped through the evening’s performance until ending with a stellar rendition performance of “Sending Out An SOS.” by The Police. This classic song was such a head-turner that many people engaged in casual conversation paused their conversations just to take in this song before the lights dimmed. The band would return to the stage to perform a solitary song, “Tornillo,” the title track to their latest and third album. Given some hindsight and the times we are all living in, we definitely recommend giving Tornillo and the rest of the Lil Smokies catalog a listen, and what’s more, purchasing the album to help support this band.

Read Our Interview With The Lil Smokies

An Evening With The Lil Smokies at Union Stage
Read More

The Lil Smokies are, without a doubt, among the most sincere, hard-working, and genuine bunch of musicians running the circuit today, who connect with so many. We here in the DMV were looking forward to seeing them again at the Charm City Bluegrass Festival. It is disheartening to hear that the festival has been delayed and we will have to wait a little longer to see this band back in our neck of the woods. Rest assured, however, that we look forward to seeing them in the months and years ahead. We look forward to Simpson’s Fiddle, Reiger’s guitar and flowing hair, Cornette’s incredible banjo playing, Parker’s steady and methodical bass notes, and Dunnigan’s dobro playing, and perhaps more of that boot-stomping fun! Everyone looks forward to capturing the magic and intensity of a Lil Smokies show in the future!

Everyone looks forward to capturing the magic and intensity of a Lil Smokies show in the future!

Sending Out An SOS

Sending Out An SOS

The Lil Smokies are a hard working and earnest band who are sending out an SOS to their fans. We at DC Music Review hope that if you have some ability to help this band you can.

A MESSAGE FROM THE LIL SMOKIES
Hey friends, just wanted to touch base and let y’all know that we’re all healthy, at home and quarantining with our loved ones. These are undoubtedly the strangest days we’ve ever met; a teeter totter of hopefulness, stress, fear and uncertainty. We’ll get through it though. Truly, we will.

Like many of you, our livelihoods have been wholly yanked out from under us. Nearly our entire income is predicated on playing live shows to crowds and festival gatherings. This, for the unforeseeable future, is now on hiatus. Because of this, we have decided to sell a few pieces of Smokies’ history and offer experiences that we hope will bring us all together. Among these items are my dobro and Matt Cornette’s banjo which have been with us for milestones including winning the Telluride Band Competition, recording our albums, and playing on stages we could have only dreamed of. We are also offering experiences like private online concerts with your favorite Smokie as well as music, cooking and fly tying lessons so we can share a bit of our world with you. Another option is to simply donate. Truly anything helps. We are forever grateful, we are thinking about you all and the miss is real.

So much love,
Andy

4. Wheel on the Water

12. Message in a Bottle (The Police cover) To learn more about The Lil Smokies you can find them here:

MOST IMPORTANTLY, please purchase a personal experience with one of the band members buy some of their gear or book a private concert by The Lil Smokies!