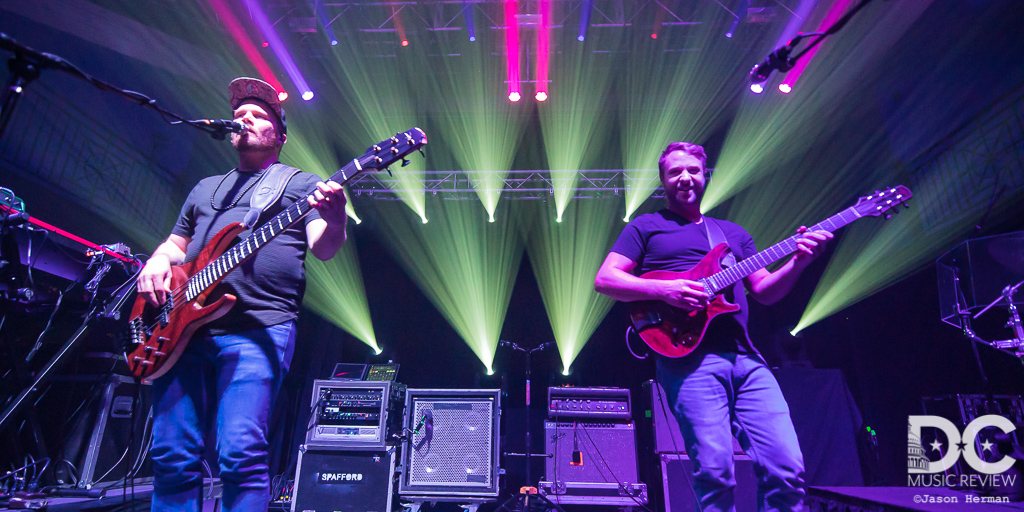 Returning to 9:30 Club for their second performance at DC's storied nightclub, Spafford threw a party last Wednesday night, treating their fans to two sets filled with fierce jamming and the "electro-funk therapy" that has propelled their rise in the jam band scene over the last 3 years. The Arizona quartet brought out a sizable crowd for a weeknight show that went past midnight, but rewarded fans that stayed out late on a school night with boundless energy and a great setlist. The band opened with a bluesy "Pretty Mama" before jumping into "Walls," a ska-infused tune that quickly breaks free into a psychedelic, synth-driven exploration and brings it home with soaring soloing by guitarist Brian Moss. Following "Walls" up with "Slip and Squander" represented a jarring, but welcome tonal shift as the band dug into the piano-led composition with vocals by Andrew "Red" Johnson and showcased a more delicate style of improvisation, where Johnson remained on the piano while Moss played lightning quick leads without any effects distorting the gorgeous tone of his custom-made guitar, "Raven." Following "Slip and Squander," the band kept things toned down a bit and performed the 1999 Filter hit "Take a Picture." The song was an unexpected, but delightful cover that allowed drummer Nick Tkachyk to take over vocal duties and had a surprising hand-in-glove fit into Spafford's live show in only the second time that the band had performed it. The next song, "Night After Night," featured the most extensive jamming of the first set, with Red taking the lead on synthesizer and pushing the band into territory tinged with elements of trance and reggae before the band closed the set with its sprawling, metal-centric instrumental, "Virtual Bean Dip," a song that showcases the range of genres that Spafford explores individually in many of the band's other tunes. After the band's setbreak, Moss strummed the opening chords of "Backdoor Funk," leading into a low-volume funk jam featuring Johnson on clavinet. "The Postman," a long-form rock suite that ramped up energy for the show's second frame, provided a runway for the band to lift off into another extended jam that clocked in at over 25 minutes -- the longest of the night. Then the reliable duo of "All My Friends" and "Bee Jam" gave way - through a seamless transition - to "Space Gadget" to close the show, offering an opportunity for crowd participation during an interlude that pays homage to the "Inspector Gadget" theme.

A quick encore of "So Into You" put a bow on the evening, wrapping up a show that delivered intricate jams and a fluid setlist to anyone who was willing to be a little groggy on the way to work in the morning. Spafford certainly offered up high-energy throughout the night to make it worthwhile, and we can't wait for them to return to DC soon.

The following videos are provides courtesy of Spafford's Facebook Page.

Enjoy our interview with Spafford before their 9:30 Club performance.

Interview by: Seth Gordon-Lipkin, video by Will Urquhart and photos by Jason Herman.