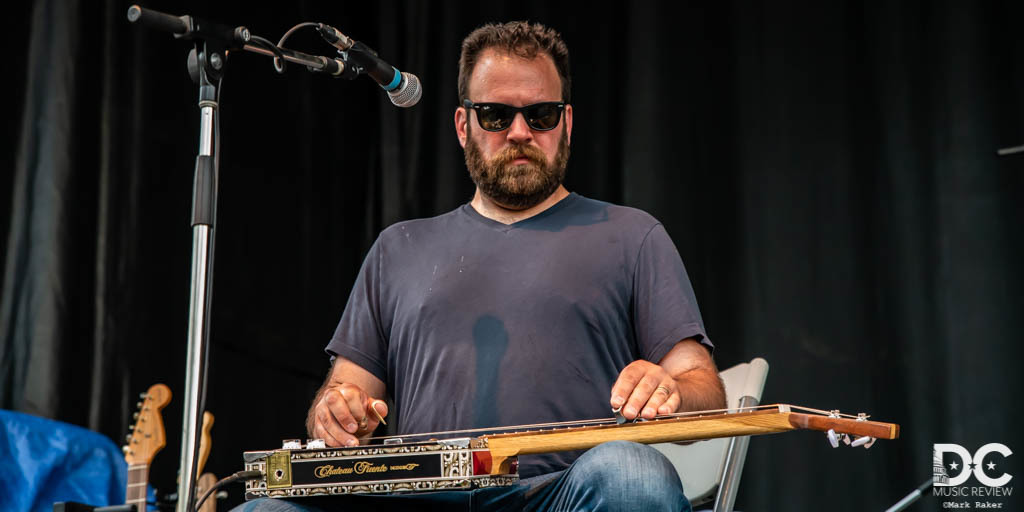 Cris Jacobs has cemented himself as a leading voice in the DMV music scene. After ten years as the front-man, guitarist, and vocalist of the Baltimore-based jam band The Bridge, Jacobs has continued to lead the scene in Baltimore and beyond through his solo project, Cris Jacobs Band. Jacobs's soulful voice and guitar chops have become a staple at local music festivals and concert venues. We sat down with Cris to talk with him about his upcoming album, Color Where You Are, which will be released on April 12th as he embarks on a nationwide tour. Be sure to catch the Cris Jacobs Band in Baltimore at Union Craft Brewing on April 12th and Washington, DC at Pearl Street Warehouse on April 13th!

DC Music Review: Hey Cris, thanks for taking the time to speak with me today. I’ve been bingeing on your new album, Color Where You Are, all week. It’s great.

Cris Jacobs: Thank you, I appreciate that.

DCMR: So, this is your first album since putting out Dust to Gold, back in 2016. How did your approach change for this album versus your last time in the studio? CJ: Well, you know, it mostly just changed as far as the situation with the band. We had really just started playing together around then, Dusty [Ray Simmons], Todd [Herrington] and I, the bassist and drummer. We went into the studio for Dust to Gold after maybe having played less than 10 gigs together, and we went in to record that album and Jonathan Sloane, who plays guitar in the band, had just talked with me about getting together and he hadn’t even really played any shows with us yet. So he came in and kind of sprinkled some stuff in when we were kind of rounding third on that record and, you know, we were just kind of getting used to playing with each other. So that obviously had a lot to do with the approach and the chemistry back then, even though there was still great chemistry. Since that record we’ve done three years of pretty extensive touring together and we’ve played a lot of shows, so we’ve really bonded as a unit, and we went into Color Where You Are more confident and with a cohesive vision. So, I brought a lot of tunes that weren’t fully fleshed out and just knew that the intuitive choices the band was going to make would work. We kept a very organic approach that way because we really trusted each other since we built all that chemistry and cohesion since the last record.

DCMR: I think that really shines through on the album. The band sounds really tight and I think cohesive is the perfect word for it. It shows a lot of your range too because you’ve got songs that feel really soulful, you’ve got country and blues influence, ballads and rockers. So, when you were putting together the material for this record, some of the songs you’d been playing for a while. How’d you decide what to include between the material you’d already written and what you had to write in order to put the record out? CJ: For this one, there was definitely less material to start with, so a lot of the songs I went in with some raw ideas of songs that either didn’t have all the lyrics finished or didn’t have one section finished. So, in the process I showed them to the band and we’d record them and listen back together. And sometimes that’s when everything kind of reveals itself to me and I’m able to see it all through together instead of just the way it sounds in my head. Basically, I just brought as much as I could, and we’d record and finish it all together until we felt like we had a full record, and at the end of the day, viewing it as a body of work or just one piece, it seemed like it was complete. We could have added a few more, but at the end of the day I didn’t want it to be a super long record. There’s a beauty in just a nice piece of music that you can listen to on a quick ride or walk. You know, less than an hour.

DCMR: One of the biggest changes for you that’s happened since Dust to Gold was the growth of your family, getting married and having a child. How did that influence what you put out in the songs and the songwriting process itself? CJ: Having a child changes a lot, as anyone with a child knows. So basically, it meant less time to work; needing to be more focused with the time that was available. It turned into a more focused, professional approach and really zoning in on what it is that I wanted to say, which I think is the other big thing. Having a family really just creates a deeper connection with the world, where it’s not just about me, and when you feel that love and concern for a family it opens your eyes to many things. Many things mean more to you. And with everything that’s going on in the world, politically and socially, while I’m sitting there trying to squeeze out tunes, I can’t help but just live in what’s going on at that time. So, it’s a combination of harder, sharper, more deliberate focus mixed with some deeper emotions that I was kind of working out and processing the world around me.

DCMR: You’ve mentioned that the opening track “Painted Roads” was inspired by Tom Petty. Can you talk about that song and how Petty’s influence impacted it? CJ: It wasn’t really a deliberate thing, but I’ve always loved Tom Petty. With “Painted Roads,” he got brought up because it really started as a simple rock tune, but after I brought it to the band it turned into a totally different tune. It just didn’t sound interesting enough to me the way we did it at first, so I suggested that we kind of deconstruct it and do something different. We kept the melody intact and as a band we were able to deconstruct the groove and build it up again with some really outside the box ideas in relation to that tune, which was a different kind of approach than we took on a lot of other stuff. It sort of made us go “Wow, we should just redo the whole record!” It was kind of an exciting moment for us as a band to realize that we could take these different approaches in the future, and it was cool for me to kind of give up the reins. It’s never like I say, “Okay, here’s the bass line and here’s what you should do, John.” It’s never like that. I play with guys that I trust and are incredible, but we took it a step further where it was like, “Hey, play something that’s totally unpredictable from what we were just doing or what the tune naturally called for and we can just lock in with each other.” It’s just inspired us to want to get together and make some music that’ll surprise us as a band. It was kind of like we broke through a crack in the door and found some new places to go.

DCMR: Last year you put out an album with Ivan Neville and toured as Neville Jacobs. Can you tell me about that project and how that work together made it into the studio for this album? CJ: Well, Ivan and I met years ago and became friends. After just crossing paths between The Bridge and Dumpstaphunk and bumping into him a few times at Jazz Fest, we really solidified our friendship at the poker table in a New Orleans casino. We just randomly ended up sitting next to each other and getting a chance to really talk and hang, and eventually the stars aligned and we were able to get together and just make some noise in a studio, just the two of us with no real expectations or any real need to do it or not. We just had a few days off in Baltimore where we could play some cards, eat crab cakes, and then we can go into the studio. Really that’s all it was, but we came out with all these cool ideas and realized we had great musical chemistry and a shared love for lots of different styles of music. He’s such a deep musical well, so I was able to just feed off of everything he was giving me and vice versa. It was all organic and really one of the most collaborative songwriting processes I’ve ever had with anybody. It was so good just because it came out of a situation with no pressure. It’s good because it’s good, not because it needed to be. That’s what I took with me into the studio this time, just the comfort with the community that you surround yourself with when you’re trying to create. There’s a million ideas out there, but the magic really happens when there’s mutual love and trust between the people that are collaborating. That’s the key to everything that I do and I try to keep that philosophy with Cris Jacobs Band. DCMR: That process sounds like it sheds expectations and egos and could be really powerful.

CJ: Right, absolutely. Like, we’ve both got our own things going independent from that project, so it didn’t need to happen. It just happened.

DCMR: So, you’ve had a couple of shows last month, but your tour really kicks off this month. What’s it going to be like bringing these songs to a live audience for the first time? CJ: There’s still a bunch of these songs we haven’t even tested in front of an audience yet before this tour, so we’re excited to roll them out.

DCMR: Is there anything coming up on this tour that you’re particularly looking forward to?

CJ: Well, obviously the Baltimore show is the day of the album release at Union Craft, which is owned by some of my best friends, so that’s a cool thing that we’re all going to be there celebrating together. They’ve opened this great new space and I’m putting out the record, so we’re all pushing creative envelopes in our own worlds. There’s a lot of love there. But to be honest, I’m excited for all of it. I really am. When people come out and are appreciating the music, it just makes it magical.

DCMR: I want to wrap up with one last question that has nothing to do with the album or music at all, as a Baltimore native myself. On a scale from one to ten, how bad are the Orioles going to be this year?

CJ: Soft six! I’m optimistic about the changes they’re making, and they’re at least committed to the rebuild. They’ll be an underdog, but we’ve got nothing to lose at this point.