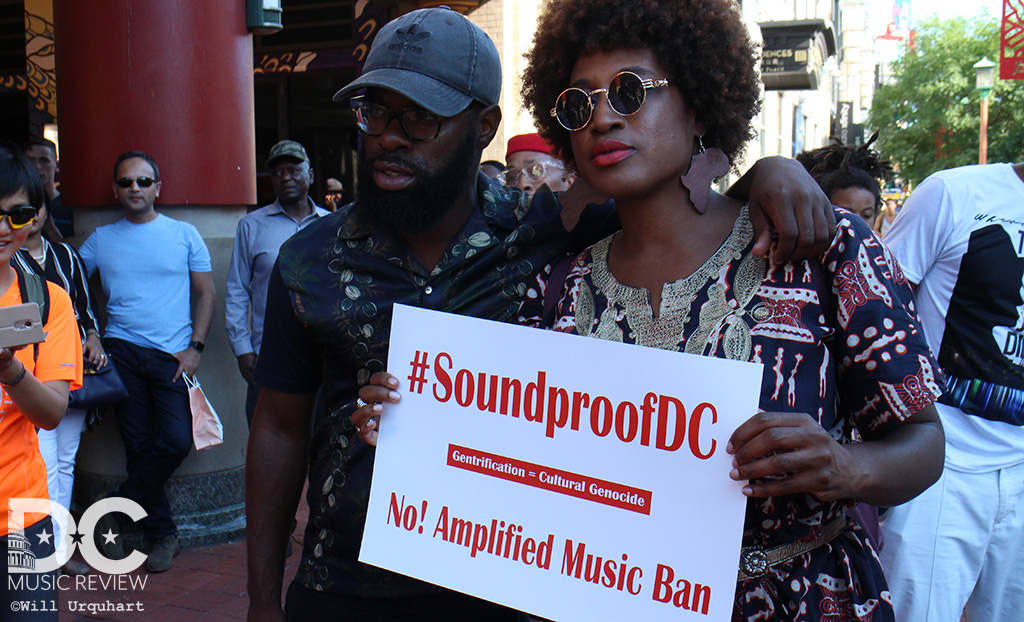 A newly released version of the Amplified Noise Amendment Act, legislation introduced by Councilmembers Jack Evans, Anita Bonds, and Mary Cheh that targets D.C.'s buskers, noticeably ignores every substantive change the music community requested after a summer of meetings and sound tests with Chairman Phil Mendelson that appeared productive at the time. When the Council of D.C. put the brakes on the original emergency legislation after public outrage in July, there seemed to be some hope for working out a more fair and just set of rules governing street performances. At a Committee of the Whole Public Hearing in October, it seemed like the Councilmembers were fairly open to some suggestions included in a revised bill written by members of the music community and released by Listen Local First. However, the new version introduced on Tuesday gives the impression that those pleas fell on deaf ears, and that the countless hours spent working with the Council were nothing more than a frustrating  waste of time and energy.

One of the most heinous provisions of the bill, the "plainly audible" at 100 feet standard, is so vague that it is sure to leave performers and law enforcement in states of uncertainty and apprehension. Members of the music community requested a more clearly defined standard based on decibel levels that would be easier to comply with and fair to both sides of the issue. When commuters receive a speeding ticket, they know exactly what it was for and they knew exactly what they had to do to avoid it. The $300 fine that would be imposed if this legislation were to pass would be based solely on the perception of law enforcement. It is the kind of vagueness that allows for biases to dictate an interaction between law enforcement and the public.

At no point during the latest committee hearing did the Chairman's office or any other council member's raise issue with the concept of a decibel limit itself nor did they seem set on the "plainly audible" standard. In fact, Chairman Mendelson went so far as to say "100 [decibels] seems like the right amount," when questioning the only certified sound engineer to testify at the hearing, Graham Smith-White (click here to see video of this exchange). As the sound engineer involved in the tests over the summer and a 20-year veteran of the music industry, Smith-White recommended a 110 decibel limit and spoke out forcefully against the "plainly audible" standard, saying, "It's an egregious standard to meet because it attempts to dictate through legislation phenomena which run counter to the nature and universe of physics. Sound simply does not work this way." As for the burden it places on performers, he told the committee, "This creates a generally non self-policeable situation. The musicians are unable to know whether they are in violation or outside of the standards."

Another section of the bill makes it illegal to use gas generators except for construction purposes, special events (which come with a fee of $330 per day), and licensed or permitted events. Up until only a few years ago, musicians could get power  at Metro stations directly from outlets that have since been sealed off, forcing them to use power generators instead. Listen Local First and the coalition of musicians, activists, and experts involved in the meetings and testing requested the reopening of those outlets. That request was summarily ignored.

An exemption meant to protect free speech rights in the case of protests leaves open a hole so big you can drive a train of quiet cars through it. The new bill requires political demonstrations to be "conducted pursuant to a permit issued by the Metropolitan Police Department," in order to qualify for the exemption.  The more spontaneous and organic protests, which can be powerful tools for change and which often occur with no real leadership structure, happen without permits and could face an added threat of fines for being "plainly audible" 100 feet away.

While introducing the legislation on Tuesday, Councilmember Evans said, "what this bill does is attempt to find a middle ground," but it is unclear what compromise he believes is included in the new version. As of this time, none of the sponsors of the bill have returned a request for comment, though Councilmember Evans office did tell us that the bill still needs a  markup where changes and member comments can be made.

Kymone Freeman, the co-founder of We Act Radio, told us upon hearing about the new version, "This is another example of the DC government proving its hostility towards the long established art community at the behest of new wealthy residents seeking suburban amenities downtown. Despite the appointment of a Director of the Mayor's Office of Nightlife and Culture, it is apparent that they want a punitive, sanitized & censored participation by traditional street musicians at the approval of their wealthy constituents."

Dior Ashley Brown, of the dAB Band and one of the organizers of opposition to bill, voiced similar disappointment:

I implore artists of the District to fight for their voice!

DC is and has been a vocal town of Marches, Musicians, and Speakers. We were never turned down. And we cannot allow ourselves to be muted.

Our native music: Go Go, our creative spaces, and now our buskers continue to be threatened. Siphoned is the culture but not embraced, valued, or protected. We as well are government workers, businesses, and residents who contribute greatly to the economy and the city’s zeal.

Leaders of the DC Music Community came together to implement ideas to make fair and balanced the Amplified Noise Act’s opposition, preparing a plan of how we all
could meet in the middle. But our voices are challenged by those again with bigger budgets, and so here we are again without consideration.

Music is one of the most powerful things we have in the District. It is the one thing that blurs the further division of status, and dismantles discrimination truly bringing us together. We need to stop this act which impedes on our rights now, because this is only the beginning of the intrusion.

Updated 01/10 at 4:40 PM]  Listen Local First released a statement of the DC Music Taskforce on the Amplified Noise Amendment Act of 2019:

The DC music community and members of the DC Music Taskforce do not support the Amplified Noise Amendment Act of 2019 B23-0030 introduced by Councilmembers Evans, Cheh and Bonds on January 8th 2019.

Our team has spent months meeting with the Chairman's office, performing decibel reading tests, and meeting with members of the Turn it Down Coalition. We listened to the complaints and suggestions from business owners, residents and musicians and proposed edits to the legislation that would protect the music community, DC's cultural heritage of live performance, and address the concerns of residents living in some of DC's most vibrant entertainment districts.

First and foremost the music community dismisses this legislation because it was introduced by three members of the DC Council who have refused to meet with our team and hear the concerns of the community that this legislation plans to penalize.

From the outset it is clear that almost none of the suggestions of the music community provided back in October were included in this version of the legislation. This is evident because the first thing we asked was for the name to be changed from Amplified Noise Legislation to Amplified Sound Legislation. Music is not noise and musicians will not be treated as a nuisance.

It is the responsibility of the city and our elected officials to make sure that as we grow, we put the appropriate measures in place to preserve the cultural identity of our entertainment districts which are a draw for residents and tourists from around the world. This legislation does the opposite. By continuing to adopt the plainly audible standard at 100 feet the council members are de-facto banning any form of funk, go go, jazz or beat driven performance that is the backbone of DC's musical heritage.

We believe that 80 dbs inside a residential establishment is the only standard that need be applied unless the council decided to use a dbs at the source measurement. In our October testimony and proposed legislation we even argued that the 80db indoors measurement can be applied to all residential and commercially zoned districts.

Finally the new legislation does not remove MPD as the enforcing party and it maintains the $300 fine which is unacceptably punitive considering a fine for speeding in the city only comes with a fine of $100.

We are re attaching our testimony and proposed legislation from this past Fall in the hopes that the council members will read our suggestion and schedule meetings with haste to put forward a meaningful version of the legislation that is fair to all residents in the city and protects the vibrant cultural make up of Washington DC.

Read the newly introduced version of the bill:

View this document on Scribd
About the author