Concert Reviews
By Will Urquhart / October 9, 2018 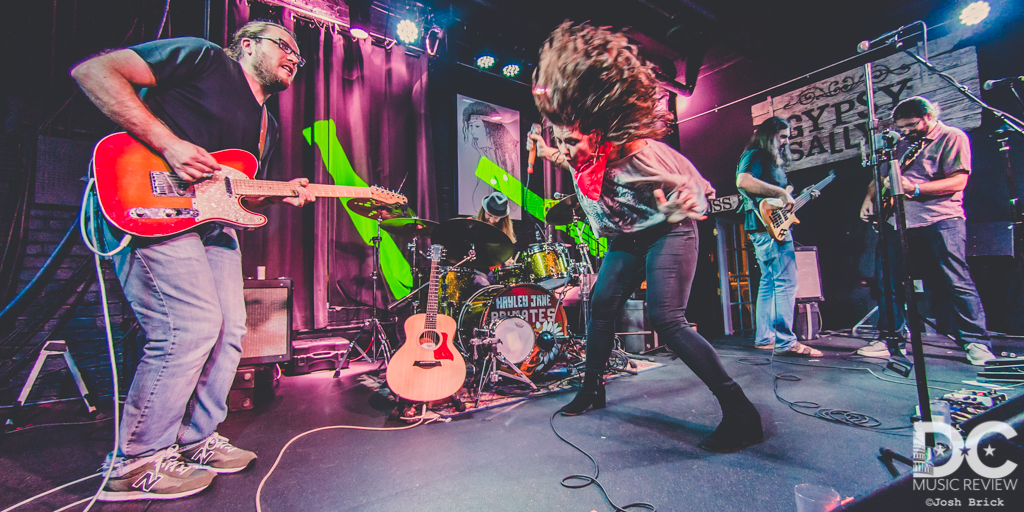 Last Thursday, Hayley Jane and the Primates opened their fall tour with a fiery performance at Gypsy Sally's, joined by Pleasure Train. Regular DC Music Review readers will need no introduction to either of these two bands, as they have both graced the pages of this website numerous times. October 4 also marked 48 years to the day since the passing of Janis Joplin. "You gotta appreciate that strong female front." Hayley Jane captured the night fittingly in that one sentence. "This is the first night of our fall tour, and we're so happy to start it here. I'd like to make that a habit." Janis Joplin was never mentioned, but a night where two powerful women commanded the stage, each uniquely memorable and deeply expressive, made for a fitting booking even if by coincidence.

This band is a force of nature, full of quirk and passion, with a lead singer who treats lyrics like an instrument, dancing soulfully through word play like it’s a section on a scale, most notably on 'I Can Do It (Poo Jam)' and the show encore, 'Look to the Moon.' Their last show here was memorable for its covers from the soundtrack of Forest Gump (with the band in costume just before Halloween as Jenny and the Gumps), but Thursday was one of their most extensive set lists to not feature a single cover. The night showcased the breadth of their original work, from one of their earliest tracks, 'Madam Humphrey,' to all five of their new songs, each debuted in 2018, 'Deep End,' 'Blue Planet,' 'Stay,' 'Choose Love,' and 'Daisy Jar.' Pleasure Train, for their part, brought some new music as well and  will be in the studio recording some songs this week, so stay tuned for some new releases from them in the near future.

The story of Hayley Jane and the Primates in 2018, at least in the DMV, is marked by headlining debuts and a growing, increasingly dedicated fan-base. We cannot wait to see what the coming years have in store for and from this band. There are plenty of chances left to see them during their 2018 fall tour, but you'll have to travel outside the DMV at least a bit, including a show opening up for Pigeons Playing Ping Pong in Philadelphia in November.

This is a band to put on your "do not miss" list, but if you did miss this show you can relive the entire night below. Encore:
Look to the Moon^

*Rainbow Connection, Somewhere Over the Rainbow, and Up On The Hill Where They Do The Boogie lyrical teases
^Blue Moon, Paper Moon, Fly me to the Moon, Moondance, and Man on the Moon lyrical teases

Fall Tour is off to an amazing start! Thanks for coming out DC! Who will we see at @shakorihillsgrassroots today?

A post shared by Hayley Jane and the Primates (@hayleyjaneandtheprimates) on Oct 5, 2018 at 6:57am PDT