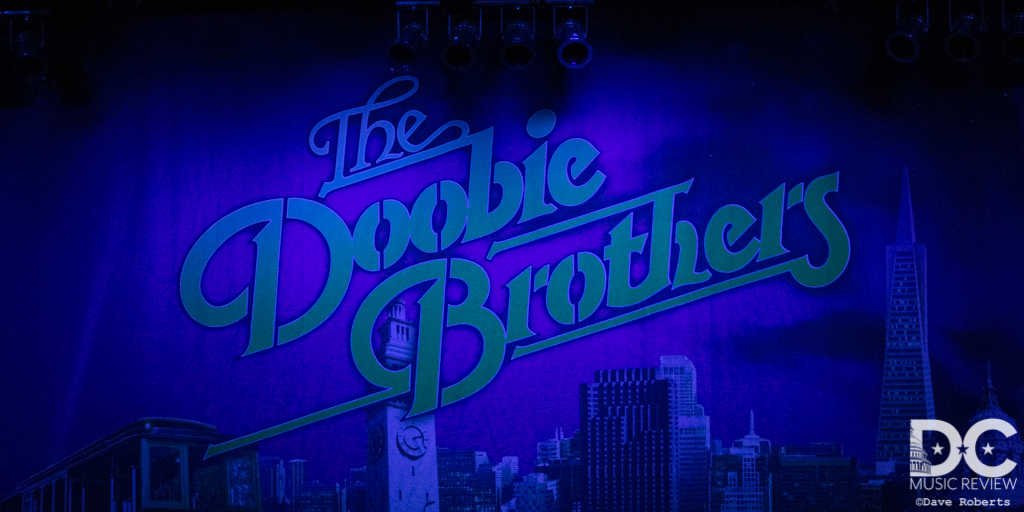 It is reassuring as a classic-rock fan to know that there are still quality bands regularly touring the circuit that can continue to play good old rock and roll.  This concert season is off to a great start, and adding another excellent performance with The Doobie Brothers is just icing on the cake.

This particular show took me up to Amish Country into the heart of Lancaster, PA.  The American Music Theatre is a beautiful venue seating approximately 1,600 people.  A very classy music hall and theatre, the AMT regularly books quality bands ranging from old to new country, classic rock, oldies and R&B, and plenty in between including in-house productions. The boys seemed up to the task of putting on a show that would get the crowds toes tappin’ and bodies groovin’.  Having a slew of hits to draw from, the recent trend for the band is playing music highlighting several early albums including Toulouse Street (1972) and The Captain and Me (1973).  These albums have some of the best Doobie Brothers music recorded on them and really capture what this band originated from in the music scene from San Jose, CA in the early 1970’s.

Leading the band is Tom Johnston, who is an original founding member of the band, playing and rocking the guitar and sharing lead vocals.  Beside him is another original member Patrick Simmons who has always brought his unique style of finger-picking, typically playing with a thumb pick, and also sharing vocals.  John McFee, who has been with the Doobie’s since 1979, rounded out the three-guitar attack that the musicians jammed with all evening long.  Mainly playing guitar, McFee also took his turn on the pedal steel, fiddle, and harmonica.  The rest of the band is nothing short of an all-star group of musicians.  The southern rock influence is noticeable with keyboardist and founding member of Little Feat, Bill Payne, who is regarded as one of the best in the business.  Marc Quinones, formerly of The Allman Brothers, handles percussion very creatively and artistically, and again ties in his style of influence into the delivery of the material.  None other than John Cowan, formerly with New Grass Revival handles the bass, Marc Russo on the saxophone and Ed Toth holds steady on the drums.

The set this evening was a great mix of music, from hard-driving guitar rock such as “China Grove,” the blues number “Dark Eyed Cajun Woman,” to a touch of psychedelia with the song “Clear as the Driven Snow.”  There were numerous moments throughout the performance when Simmons and McFee came together to the the front of the stage with acoustic guitars and totally fed off of each others licks.  Finessing their way up and down the fret board, these guys have so much talent that it’s no wonder they are smiling from ear to ear while sharing in each others masterful delivery.

Having three guitarists in a band definitely creates a lot of work for the guitar techs, and these guys were hopping all night long.  There were so many six-string changes and guitars slinging stage right and stage left that could make a persons mind warp.  Somebody has to keep all the songs and tunings straight, and the crew was right on the money tonight. Let me put it on the record by saying that the band sounded fantastic.  The members were interactive with the crowd, and really seemed to be having a good time.  Although the theatre was not sold-out, the fans that were in attendance definitely helped the band find their groove and by the end of the night, Johnston finally inspired everyone to get up out of their seats and jam with the band.  With sing-alongs including the popular “Black Water,” the lead-singer helped to make everybody feel like they were up on the stage singing right along with the band.

Other crowd favorites included a very funky “Long Train Runnin’” and the rocking “Jesus Is Just Alright”.  The boys played homage to Payne’s roots by leading off the encore with a superb rendition of Little Feat’s “Dixie Chicken” and finished the night with “Listen to the Music”.

The Doobie Brothers are finishing a brief headlining tour this spring before they join forces with Carlos Santana for a super-summer tour.  I sometimes wonder how bands that have been touring for so many years stay fresh and have evolved their mentality and performances from the early days of playing large arenas, to smaller venues, theaters, and pavilions.  I would think the intimacy of a smaller venue would be highly regarded by the performers enabling them to really connect with the audience.  The Doobie Brothers were able to share their gratitude with the fans tonight in Amish Country by nailing a solid-set, delivering a stellar performance, and leaving the fans wanting more until the next time.

Click here to see the setlist for The Doobie Brothers' performance at American Music Theatre on April 10, 2019