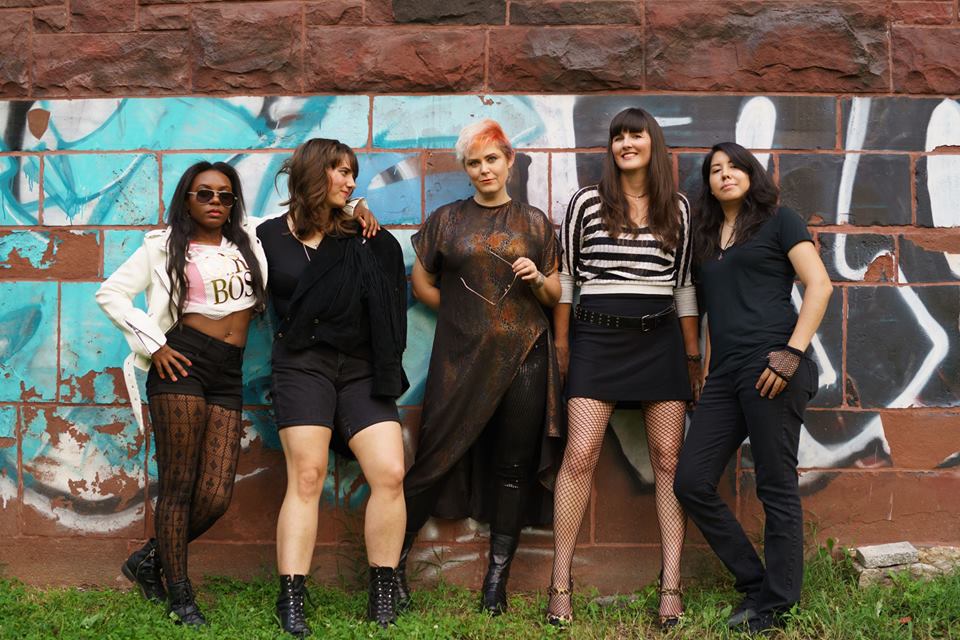 You know that sensation before some shows when things feel electric? That palatable vibrancy in the air?

That was the feeling at the September music showcase at The Dew Drop Inn, hosted every month by the DC-based band The OSYX. The place was bustling. The energy was heightened like it is for a show that you know is going to be good, but there was something special beyond the usual fevered excitement. A specific and deep sense of connectivity among the people there.

It might have had something to do with the promo for the show:

"Brace yourself for a SURPRISE ANNOUNCEMENT from The OSYX!"

After three varied, powerful, passion-infused sets from Baltimore's Santa Librada (feminist / queer / trans-fronted punk band whose songs speak to feminism, transgender rights, love, sex and the surveillance state), DC's Company Calls, and Greenbelt's Lighthouse Row, it was time for The OSYX to play.  And midway into their emboldened set, The OSYX unveiled something huge.

​They announced that they are launching a 501(c)3 nonprofit record label called:

THIS COULD GO BOOM!

They have a clear mission to:

And if the immediate outpour of love and support to this announcement was any indication of where this label is going, it will most certainly be shaking things up.

DC Music Review had some questions for the band about how This Could Go Boom! (TCGB!) came about and where it is heading.  (Check out the video below!)

Where did this idea come from? The label is the brainchild of Erin Frisby (of FuzzQueen and City Witch), Ara Casey (of Honey Kill), Selena Benally (of More AM Than FM and FuzzQueen), Robzie Trulove (of RadaR), and Maya Renfro (of Sonic Eddy and Pagan Reagan), who came together from their other bands in 2018 to create  the "fierce af" band, The OSYX.

Like the band's namesake, the legendary female alpha wolf “The ‘06” and her pack, The OSYX  expertly harnesses and honors feminine energy to create a sound, a statement, and a sense of community that is critical to today’s music scene.  Each member brings her own unique strength, musicality, and passion into one pro-womxn collective.

In less than a year of forming, they have played many beloved DC-venues and have a dedicated and growing fan base, not only because of their music — which is singularly original, largely raucous and at times silvery — but also because of their message. They are all about inclusion, equality and taking care of one another, and at the end of their shows their loyal audience is howling along with them which makes the room feel like a pack, fueled by love and mutual respect.

The OSYX started talking about holding a crowd-funding campaign to put out their first record, but quickly realized that they wanted to create something that would last beyond one release. According to TCBG! co-founder Erin Frisby, "our experience (as a band) has been so unbelievably collaborative and uplifting. We wanted to harness that feeling and send it out into the community."

Which is why it makes perfect sense that they are broadening their message into something even bigger.

Why create This Could Go Boom!?

Per its mission statement, This Could Go Boom! envisions a world where:

"music informed by and created from gender diverse perspectives is normalized rather than tokenized, fetishized, or marginalized."

Over pizza and a brainstorm session with fellow board members and volunteers, Erin described the label as being "for people who do not have a seat at a table." (To which someone yelled, "f*ck the table!" and Erin responded, "we'll build our own!")

The label wants to set a new standard for those typically underserved in the music industry.  Beyond producing records, the label wants to "seek equal representation on the airwaves, online, at music festivals, and in positions of power and influence throughout the music landscape."

What makes This Could Go Boom! so significant right now?

We can think of many reasons why this matters now more than ever, and we asked this question of Erin. She poignantly and emphatically responded:

This Could
Go Boom!

"This project is about sharing power. We want to operate as a non-profit so that we can always remain mission driven rather than profit driven, so that we can circumvent patriarchal and colonized thoughts surrounding marketability, target audiences, and ‘the way things have always been done’." —Erin Frisby

How will this happen?

This is a collective endeavor. The co-founders have made it clear that this can't happen by a few people, but rather that it is a movement that should be led by the people who are directly affected by discrimination. They look for voices that will, "explore and champion creative ideas that challenge conventional colonized and patriarchal practices."

This Could Go Boom! will start by with collaborations with members of the music community with marginalized identities who are key touch points for artists. According to Erin, the organization plans to "not only release music from trans and cis women, non binary and intersex musicians," but also "work with, collaborate, and hire writers, marketing specialists, recording engineers, and visual artists from these and other gender-marginalized identities."

TCGB! is also creating a professional resource directory of the demographic being served so that people can be more deliberate about the choices they make when booking shows, festivals, radio spots, and undertaking music production projects.

In addition, Erin emphasized that will be an educational component to the label. If finding local people to work with is a challenge, she said it means, "we need to insist on learning and professional development opportunities on our projects for those who want to learn these skills. We’re also starting a mentoring program where people can gain live music production experience with hopes of cultivating the engineers of tomorrow."

And in terms of leadership, Erin explained, "we have a mandate to create a board that accurately reflects our music community, and someday we (The OSYX) won’t be on the board at all, someone else will. This is for all of us who have been quieted or silenced."

Next, fundraising is required.

To this end, TCGB! launched an Indiegogo page with a goal to raise $10,000 that will go toward discovering artists, record production, establishing and maintaining an online media presence, printing costs, artwork, label branding, national promotion, and merchandise.

This represents the bulk of what an artist/promoter is looking for when trying to get their music out there and perhaps some of the greatest challenges for marginalized persons who are not always welcomed through the traditional, mainstream approach.

This Could Go Boom! believes in the value of stories, voices, and perspectives of Cis and Trans Women, Women of Color, Indigenous Women, Immigrant Women, Women of Size, Female identifying, Femme, Non-Binary, and Two Spirit people, and all intersecting identities not readily represented, embraced, and valued in the mainstream music landscape."

—This Could Go Boom!

From talking with the band, listening to TCGB! co-founders and volunteers, visiting the Indiegogo site, and talking to fans, one thing is very clear:

​What's at the heart of This Could Go Boom! are stories.

​More than just the story of how this incredible band of women came together and were inspired to create this label. It's about the stories that we have all heard along the way from people treated unfairly, as well as the countless stories that have yet to be told.

And what can be done moving forward to make positive change.

“Because our end goal is putting out great music from unique perspectives rather than flooding known markets with more of the same for maximum profit share, we are in a position to cater to the needs of collaborating artists. A plan that is going to support a single mother who has experienced homelessness is going to be different than a plan that will support a college aged trans woman of size, which will be different from the perfect plan for a Black musician in her 80s. Part of visibility is listening to individual stories and meeting the needs of musicians where they are outside of the normal demands of the industry.”

How to get involved!

To contribute to the

This Could Go Boom! campaign,