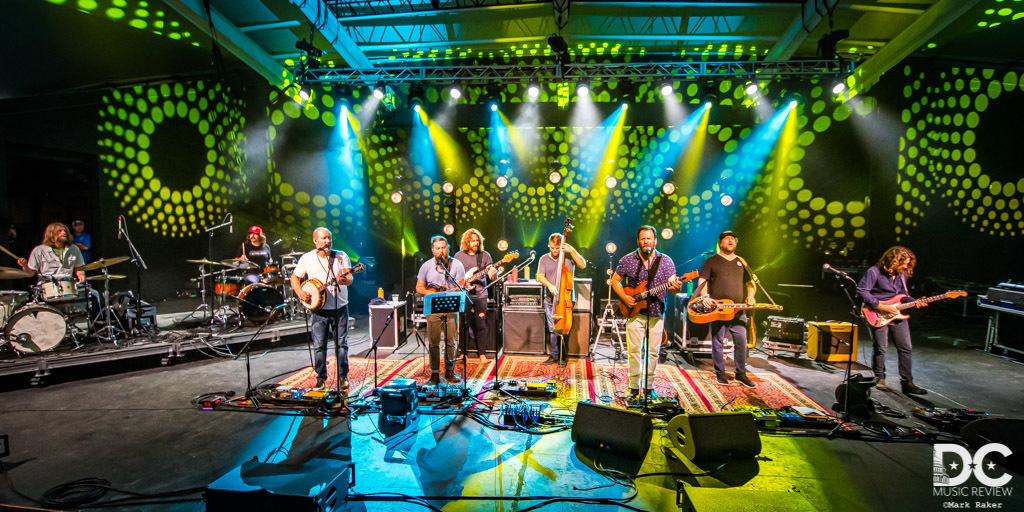 ​Forget casual Wednesdays, nothing could possibly beat the Thursday show that we saw at MECU Pavilion in Baltimore this past week.  Coincidentally, the day was one that always brings about some amazing collaborations and renditions of Grateful Dead music, as artists around the world celebrate the birthday of the man himself, Jerry Garcia.  This year was no different, and as the Michigan quintet sensation came through our neck of the woods, they teamed up with another Dead Head and local phenom, Cris Jacobs Band. ​Coming correct right off the top, Jacobs, along with band mates Dusty ​Ray Simmons, Todd Herrington and Jonathan Sloane, also took some time to pay tribute during their set with an heartfelt version of "Althea".  The band got the crowd ready and excited for the main event and were also joined by Paul Hoffman for a stellar version of "Bone Digger" that has become a favorite of both bands (a Jacobs original) and an often-expected collaboration, seeing as both bands love to play the tune, even when not sharing a stage. The set list Thursday from Greensky ​included a number of songs ​which, I personally, have never even gotten to see live and that's always a treat in itself. ​  Also included, of course, were some favorites like "Windshield", "Fixing to Ruin" and "Bring Out Your Dead" (maybe a tease of what was to come?).  The crowd was all smiles, getting down quite properly, but even after a strong two sets, nothing could have prepared attendees for what was to come.

Leaving the stage to prepare themselves while the crew prepared the stage, all nine members of both bands returned for an absolutely legendary twenty-seven minute encore.  The extra large crew wasn't the only surprise though as we could see that alongside Dusty's drumset was now also a second, belonging that night to Mr. Dave Bruzza himself.

Having already ​addressed some of the latest headlines, involving a certain person of power and their verbal vomit of tweets directed at Baltimore, ​earlier in the evening, it was an absolute nail-on-the-head pick to kick off the three-song encore with the Deads "Wharf Rat"​ as a tribute to our neighbor to the north.

After more than ten minutes of the location-appropriate song, we all heard it - the first few chords that come together and kicked off "Scarlet Begonias".  Bruzza took the lead on vocals as he also demonstrated his drumstick capabilities and lead the group into an epic, crowd-goes-wild rendition of what I consider to be one of the greatest song combinations to hear live - and ON JERRY'S BIRTHDAY!!!! Almost fifteen minutes of musical bliss seemed to last much longer and it would be hard to argue that every person in attendance couldn't see and feel the magic in the air.  Each individual musician sharing the stage at MECU Pavilion came together to make the enchanting energy ​that was emanating from the venue.  The crowd kept the vibes high and there was nothing left to do but smile, smile, smile.

Don't take our word for it, check out the video below that captured the entire encore of Cris Jacobs Band and Greensky Bluegrass celebrating Jerry's birthday with the fans in Charm City!

This video comes to you courtesy of Ben Wilson's YouTube Channel

Thank you Baltimore! What a night we had at the @mecupavilion with @cris_jacobs, @toddherrington, @dustogram and @jonathan_sloane - thanks so much to all of you that joined us!

Click here to see the setlist for Greensky Bluegrass's performance at MECU Pavilion on August 1, 2019

3. Room Without a Roof

6. Before Bring Out Your Dead >

7. Bring Out Your Dead

3. Fire on the Mountain (with Cris Jacobs Band and Dave Bruzza on Drums)